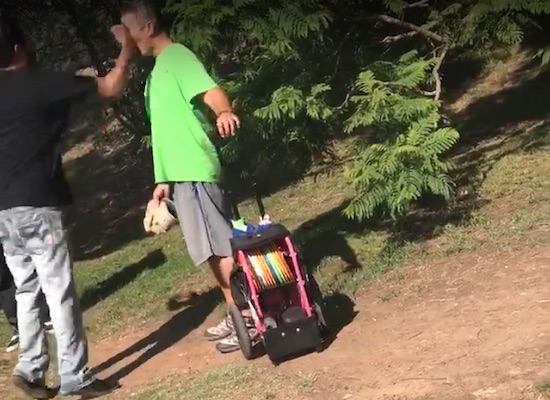 Just another day on the disc golf course.

Chances are that if you’ve got nothing better to do with your day than hang out with your buddy drinking cans and picking branches off trees then you’re going to be a bit of a lowlife scumbag, and the video below pretty much 100% confirms this.

In the video, a guy named Dante Mena is playing disc golf with his buddies on Morley Field when he confronts two surly looking characters who seem to be loitering around the course breaking branches off the trees for no real reason. This was probably a bad idea considering the look of these guys and this viewpoint was shortly justified when one of them cracks Dante hard with a sucker punch uppercut that knocked him straight out:

Ouch. I suppose credit where credit is due – that’s a hell of a punch – but you’ve also gotta call a spade a spade and label these guys for exactly what they are: absolute scumbags.

For more sucker punches, check out this bouncer showing some punk kid how it’s done. Don’t mess with the best.