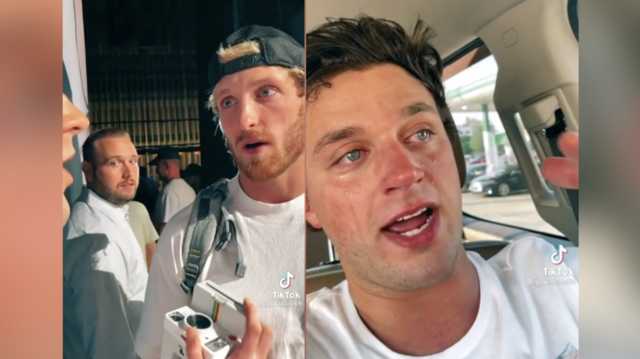 This is beyond cringe.

A guy named Austin Wallace made the bold choice of quitting his job before stalking Logan Paul and managing to secure a quick impromptu meeting with him, in which he begged him for a job doing anything at all in Los Angeles.

I guess it didn’t quite play out the way he imagined it in his head, because Logan Paul promptly turned him down and left him crying about it in his car…

I don’t want to be too harsh on this kid because it does take guts to do what he did, even if it was staggeringly ill-thought out. I honestly feel bad for him because he must’ve been 100% sure this was going to work in order to quit his job without even securing a new one first.

Logan did give him some decent advice though; don’t sneak backstage to tell someone you’ve never met before that you quit your job in order to work for them. It’s just a tad bit creepy and weird. As Logan says, you’ve got to earn it. Start a YouTube channel, make some connections, put yourself out there and put the work in.

Or… he could go back to whatever his $100k (£72,500) a year job was which is pretty f’n sweet for a 22-year-old if you ask me. It does at least look like he’s realised how ridiculous the whole idea was now that he’s poking fun of himself on TikTok, so fair play to him on that:

@aj_wallace69Here it is everyone got jokes

For the time Logan Paul punched a window and ended up hospitalised upon realising his rare Pokemon card was fake, click HERE. It happens.