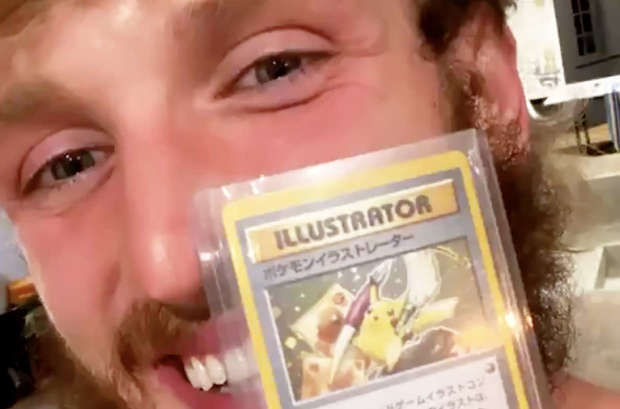 Whenever I come across Logan Paul I can’t believe that the guy is super rich and famous because everything he does is so ridiculously stupid and asinine and once again he’s living up to expectations.

If you’re a regular follower of Paul (I’m not either don’t worry), then you’ll know that he recently started getting into Pokemon cards and spending a hell of a lot of money on them – his first purchase was a base set booster box for $216,000. Alright for some isn’t it?

Anyway, somewhere along the way he managed to pick up an extremely rare Pikachu Illustrator card which is apparently worth $2 million, but unfortunately it turned out to be fake and this caused Paul to punch through a window in anger. Subsequently, he cut his arm up pretty badly and ended up having to go to hospital and get nine stitches for it – here’s how he broke the news to his followers:

found out my $2M Pikachu Illustrator card was fake, got angry & punched a window (it was supposed to be a joke), ended up nearly bleeding out and got 9 stitches. I’ve officially bled for Pokémon. help me pic.twitter.com/7bg36XM785

Lol? Not really sure whether to laugh or cry about this, but probably the former as this dumbass behaviour is probably only going to endear him to his fans and make him even more famous, whilst I sit around here just dreaming about the time I can spend over $200,000 on something as superfluous as Pokemon cards. Maybe one day. Sure.

For more of the same, check out Logan Paul giving one of the most bizarre interviews of all time on Fox News. Schmuck.