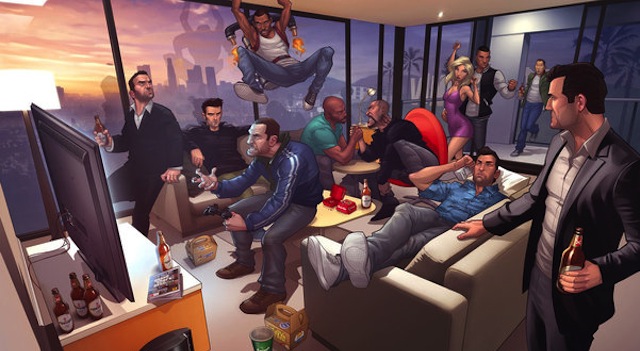 GTA V’s online multiplayer feature has been revealed and it’s pretty much a living breathing online universe where you can do whatever you want. Wow.

Remember when we showed you the first gameplay video from GTA V a month or so ago and it looked completely mindblowing? Well, prepare to have your mind blown again by a factor of about ten thousand.

Since its announcement, everyone has wondered what the multiplayer online aspect of GTA V would be and how exactly it would work. Well, here’s the scoop – there’s not actually a mutliplayer mode. What there is though is an invitation to GTA Online which is effectively World Of Warcraft in the GTA Universe. And what could be more awesome than that, right?

Basically, you can do anything you can in GTA V in GTA Online – so that includes looting, co-op heists, deathmatches, races, gang attacks, crew vs crew playlists, sports (like tennis, BASE jumping, golf and more), plus ‘ambient’ events like armoured van robberies, crate drops, import/export car acquisition, bounties, not to mention the implicit morality and social dynamics, or the really mad stuff like the ability to insure your car or play the stock market – except it’s online in a universe of hundreds of thousands.

Apparently there are only ever 16 players online in your particular game because it would be way too hard to have everyone in exactly the same universe (I don’t really get technical stuff like that but it makes sense right?) and you’re all jostling for reputation points, cash and pretty much unlimited material wealth, like buying huge mansions and penthouses. Just like GTA V, there’s not really anything you can’t do in GTA Online.

Most of it seems to revolve around you phoning up your friends – or other online players – and setting up missions and heists and playing them out together – kinda like a more complicated version of COD team deathmatch or something I guess. There’s loads and loads and loads of cool touches by the sound of things though – characters respond to the tone and volume of your voice during robberies and heists, you have to deposit money in the bank because if you die you’ll lose some of it, you can insure your souped up cars so that if they get destroyed then you can get new ones fairly easily, you can attack a company to make its share value drop then buy shares and sell them again when it rises etc etc – and there’s also scope for players to design their own missions and have full on gang warfare with other gangs on the street of Vinewood – GTA’s version of Hollywood.

It looks incredible, and it also looks like GTA Online could literally take over the life of people who reject World Of Warcraft for being too geeky, which is probably everyone else in the world who doesn’t play WOW. It could be a serious problem for the world’s economy, but it looks like it’s going to be seriously awesome as well. GTA Online begins two weeks after GTA V’s release date of September 17th, so pick up an ounce and be prepared to never come out of your room again. There’s a three minute trailer below and also a massive 50 minute preview which shows you pretty much everything you need to know about it.

It’s well worth watching if you’ve got the time – and if you have then you’ll probably be stuck in GTA Online for the rest of your life after October.

Play Every Sega Mega Drive Game Ever Made Online For Free