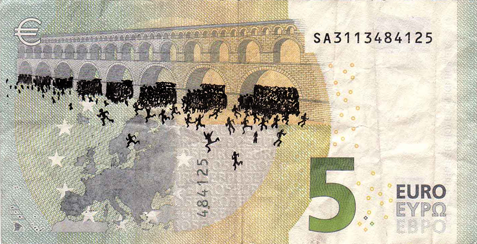 In a world where huge gaudy art projects have become the norm, it’s nice to see someone concentrating on something small but pervasive. Greek artist Stefano spends his days scribbling little black stick figures onto shiny new Euro notes; I’m sure he does other things too, but judging by the size of his back catalogue this must take up quite a bit of his time. According to him:

As from February 2014, a series of Euro Banknotes, are drawn, scanned and spent on a daily basis. A social medium hacked to become part of a new territory. This site is a documentation of this attempt.

He goes on to say:

Observing the euro banknote landscapes one notices a lack of any reality, whatsoever for the last five years the crumbling Greek economy has hatched violence and social decay — so, I decided to fuse these two things. through hacking the banknotes I’m using a European a document, that is in cross-border circulation, including Greece — thus, the medium allows me to ‘bomb’ public property from the comfort of my home.

So, Stefano draws on each Euro note, scans it in and uploads it, then puts the note back out into the public domain to be spent. It’s a really simple but cool idea. Check out his works over the next few slides: 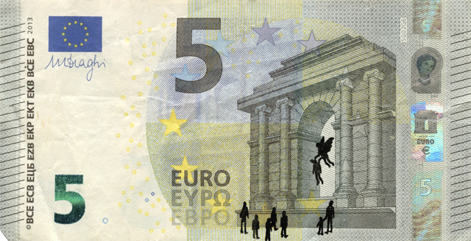