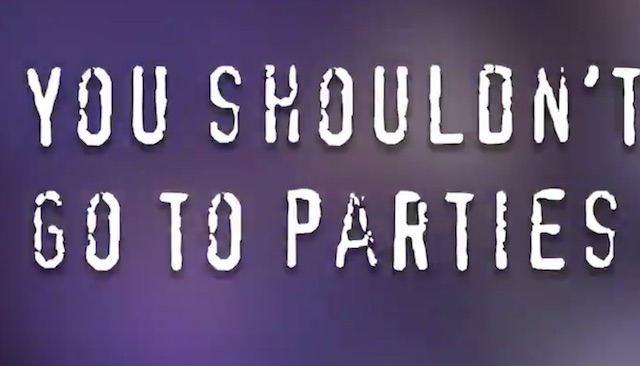 This is so stupid.

I said yesterday that the government hadn’t actually been that embarrassing this week, but now they’ve come up with a new advert telling people not to go to house parties/gatherings that rips off the iconic 00s piracy advert that played every time you watched a DVD or VHS and it is BEYOND embarrassing.

The original advert in question is so embedded in our brains because of the amount of times that we saw it and how awful it was and how it didn’t really make a sense – there’s no way that stealing a car is a comparable crime to lending someone a video tape or recording it onto one of your own – that it’s kind of surprising that someone would want to copy it to get a serious message across. Yes, the new government version is kinda funny – not really in a self aware way though – and will probably go viral because of its similarity to that advert, but they’re also kinda missing the point because nobody followed the advice in that advert.

I’m pretty sure that people are going to disregard this one as a joke as well because of that. Seriously mixed messages coming from it.

Anyway take a look and see what you think, then have a look at some of the best hot takes below that as well:

All gatherings are currently against the law.

Some font as this trash from 20 years ago pic.twitter.com/YjT35KBmDP

This was most likely produced by a brand new ‘PR company’ set up by a Tory minister last week, and they were probably paid £50K to make it.

It’s so aggressive and shit with all that wobbley graffiti style writing. Maybe someone’s 12 year old made it on their phone.

How many thousands did you pay your mates to make this and not even centre the captions?

Totally agree with the message, but this video is straight up trash. Like why would you bring back the shit ass piracy vid vibes. I guess it's to try and hit sharability, but a message like this shouldn't be seen in the context of a meme. An agency somewhere gave you bad advice.

I think that last one really hit the nail on the head. What a joke.

It's kinda sad that this probably won't even be remembered in the grand context of everything because of how badly the whole situation has been handled. This one you could at least laugh at without feeling too bad about everyone dying.

For more of the same, check out when the footballer Ashley Young gave better advice about the pandemic than the government. Says it all really.