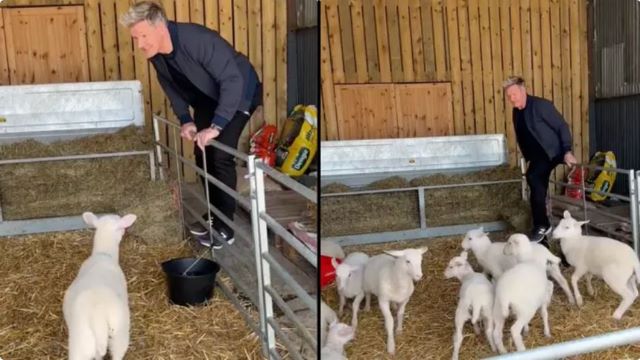 I don’t think anyone was ever expecting Gordon Ramsay to get on board the vegan train, but he’s been accused of taking things too far this week after sharing a TikTok in which he can barely contain his glee when selecting the perfect lamb for slaughter:

@gordonramsayofficialThe Lamb sauce was still not found in the making of this video…..

The way he goes “Mmm yummy yum yum yum” as he leaps into the enclosure to select his lamb is just prime trolling behaviour from one of the all-time vegan trolls. Sure enough, he’s being dragged through the mud all over social media today, though I can’t help but think that was the effect he was going for.

I can see why the clip makes for uncomfortable viewing, especially with how innocent and adorable those lambs look, but I’m not a vegan or vegetarian so it would probably be hypocritical for me to criticise Ramsay over it. On the plus side these lambs do seem to be in much better living conditions and treated more humanely than most animals that end up on the dinner table. Even if they do have to listen to Gordon Ramsay going “yummy yum yum yum” moments before they meet their maker. What else can you say really? This is how meat is made, and we all know it.

For the Subway boss who taunted a vegan worker by waving meat at her and saying ‘eat like a man’, click HERE.