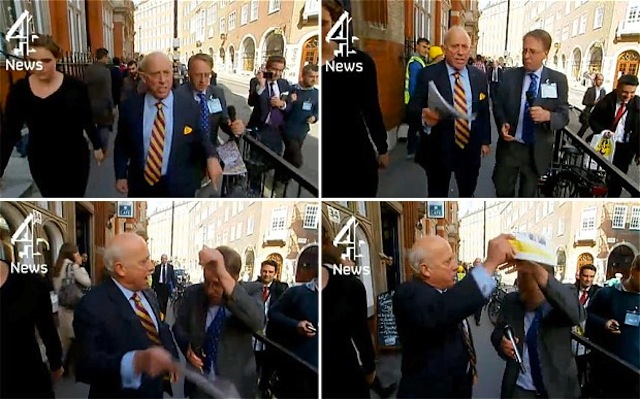 UKIP politician and MEP Godfrey Bloom has put his foot right in it.

The UK Independence Party — which always seems to be caught up in some kind of racist or sexist scandal — faces a fresh blow today after MEP Godfrey Bloom called a group of women “sluts” at his own party’s conference.

The event was ironically staged to promote the advancement of women in politics — but Bloom kind of set his party back a few millennia with his comments. He’s now been suspended amid calls to quit his £70,000 a year position.

â˜› Next: Why We Need To Grow Up And Stop Using The Word ‘Slut’

He made his moronic remark when some of the women at the meeting said they’d never cleaned behind the fridge. Bloom for some reason saw fit to say: “This place is full of sluts.”

When confronted by a reporter on the street about his comments, Bloom said that actually, all the women in the room laughed at the joke. He grew increasingly uncomfortable as another reporter kept probing him, and eventually gave him a whack with a UKIP brochure:

Bloom later told the BBC that he was using the word “sluts’ as the word was originally intended: “it means you’re untidy, that you leave your kit lying around”. Hence, women that didn’t clean behind the fridge were untidy, i.e. sluts.

Guess what though? Mr Bloom has an autobiography coming out today. Decent timing for a cock-up of this magnitude.

UKIP leader Nigel Farage tried to defend Bloom with these comments: “The trouble with Godfrey is that he is not a racist, he’s not an extremist or any of those things and he’s not even anti-women but he has a sort-of rather old fashioned territorial army sense of humour which does not translate very well in modern Britain.”

However he then conceded that Bloom’s remarks were “wholly and highly inappropriate” and that was distracting from the ‘good work’ that the party is doing.

Yeah, you guys keep at it. Good luck with the female vote. 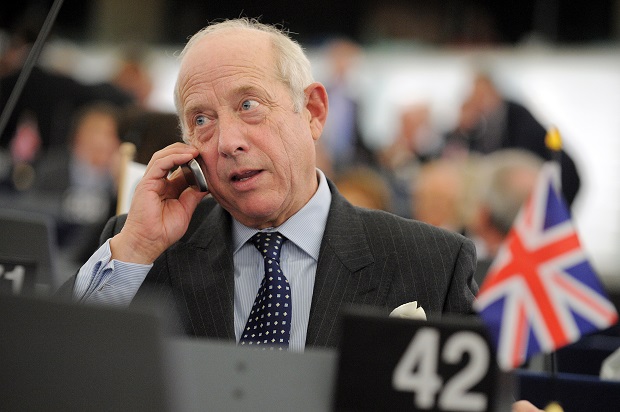