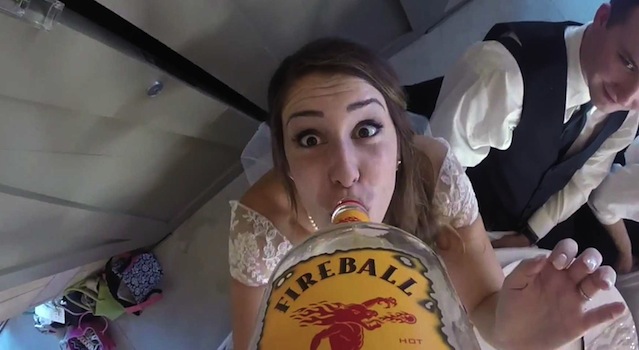 Now this is how you make a wedding video.

Wedding videos normally capture the ceremony and the first dance and then loads of scenes of the bride and groom looking wistfully at one another whilst everyone else is just standing around having a great time. Boring as fuck.

That’s providing you go for the traditional wedding video option and don’t photoshop your wedding of course. Either way, neither option really include the rowdiness that goes down after all the speeches at the after party, because anyone who has ever been to a wedding will know that people get down and dirty and loose as fuck at these things due to the copious amounts of alcohol being served.

One guy though had an absolutely genius idea over the weekend though and decided to spice up his buddy’s wedding by taking a bottle of Fireball whiskey – one of the most deadly types of whiskey known to man – to the reception and passing it around to get the party started. To make it even better though, he attached a GoPro camera to the bottle so that he could film everyone taking a shot from it and getting absolutely smashed as the night went on. Genius.

Subsequently he produced this wedding video, which is probably one of the best wedding videos I’ve ever seen. Enjoy.