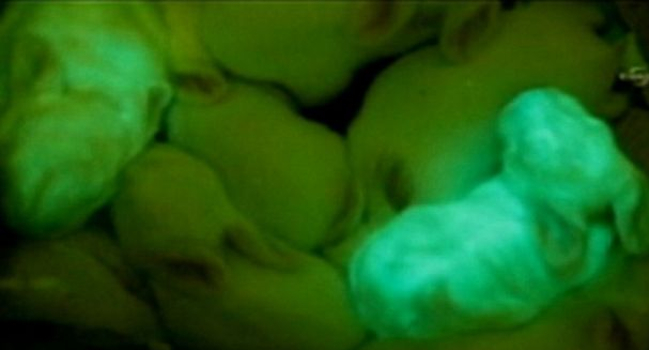 Scientists create glow in the dark rabbits by inserting genes into the rabbit’s DNA. Question is, how long do we have to wait until we can buy them as pets?

Scientists have figured out a way to clone rabbits that glow in the dark. And look, it actually works. This isn’t some sort of half-arsed, cop-out glow, like those glow-in-the-dark stars that you had on your ceiling as a child that run out of juice in about one day. This is a luminous green, fucking radioactive, ‘someone get a Geiger counter or a gun because this thing is going to go feral’ kind of glow.

It was reported that the production of these rabbits “may lead to a new way to produce medicines.” The significance of the experiment was too insert or modify an animal’s genes, which scientists will hope to use in the future to create better and more efficient medicine. Of course, I don’t believe any of that. I think they just wanted to make freaking awesome glowing rabbits. Apparently they’re making glowing lambs next.

Dr. Stefan Moisyadi in an interview has said that “their fur is beginning to grow and the greenness is shining right through their fur. It’s so intense.” Intense? Woh there, has he just seen a double rainbow? As if we needed any more proof that this isn’t a real experiment, but more of an excuse just to create really cool animals for the post-apocalypse.

I would rank this as possibly the biggest scientific discovery since the Higgs boson particle, but then I would also give ¾ths of my limbs to be able to use a glowing rabbit or cat or tortoise as a living nightlight. Wouldn’t even have to waste batteries on the thing, just feed it occasionally and bam, nightlight. I’m counting down the hours until these rabbits go on sale as pets. Watch the news report below.

Meet Buddha – The 31 Pound Cat Who Only Eats Human Food