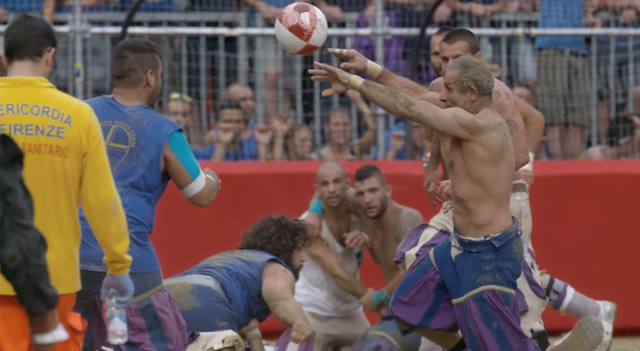 No Italians are gonna be taking a dive in this one.

We’ve featured some weird variations on football before – like bossaball, which essentially combines football and bouncy castles – but never anything as mental as this.

The name of the game is Gladiator Football and it takes place in Florence every June and has been going on for centuries. There are two teams of 27 men and the aim of the game is to get the ball over a 4 foot fence at either end of the pitch. Four teams represent the four different districts of the city and the winner takes home a cow.

Pretty much anything goes, and as you can imagine the results are absolute carnage. Italians might get criticised for diving in real football, but trust me – nobody is going to take a dive in this game because it’ll probably result in your head getting kicked in.

Still, this is nothing on the crazy Russian MMA competition Hip Club, which literally makes no sense and is one of the most brutal things we’ve ever seen. Or UFC skydiving for that matter either.

I actually lied and Lazer Horse did write about this a year ago, for a more detailed documentary about it (90 minutes) click here.