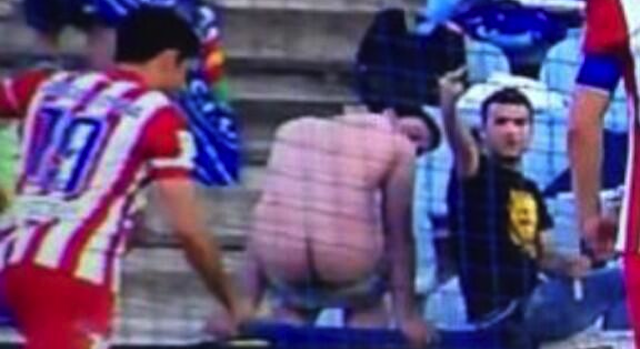 If this actually works then we might start seeing an influx of people doing it at football matches all over the world.

I’m sure a bunch of people have tried this before at football matches, but I’m not sure if it’s ever worked until now. Maybe we’ll see more of it after last night, even though it didn’t really do anything to affect the overall outcome of the game.

Athletico were playing away at Getafe last night as they continued to try and win La Liga for the first time since 1996. Midway through the second half they were awarded a penalty which could have been a turning point in the match as they were winning 1-0 at this point.

Diego Costa – who has been such a menace this season – stepped up to take it but couldn’t find the back of the net as his penalty was easily saved by whoever plays in goal for Getafe (sorry my La Liga knowledge of small teams isn’t all that). Replays revealed that Costa may have been distracted by someone in the crowd who had pulled his trousers down and was full on mooning the Athletico player.

To be honest I can’t believe it worked, but you’ve got to think there has to be come connection.