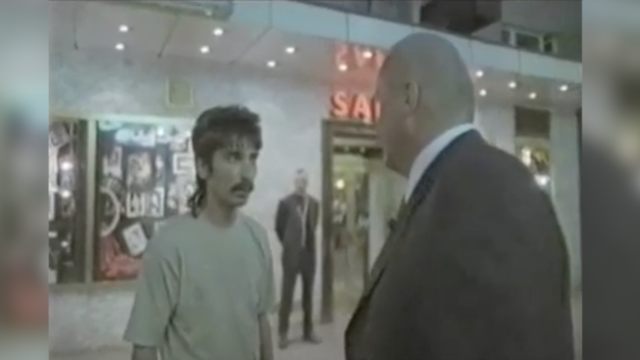 Stefan Hentschel was a big time pimp over in the St. Pauli red light district in Hamburg, Germany, back in the 80s and 90s, and this week an old clip of him has gone viral in which he slaps some random dude who interrupts a media tour he’s giving of the area.

Oof, that’s gonna ruin your day/week/year anytime you get pimp slapped on camera like that. Thanks to a German-speaking commenter on Reddit, we also know what was said between the pair:

Pretty much a day in the life of a German pimp then.

Sadly (or not, if you ask the mullet guy who got slapped), Stefan Hentschel committed suicide in 2006, years after this footage was filmed. According to Wikipedia (translated from German):

On December 18, 2006, Hentschel hanged himself in the boxing cellar of the trendy bar “Zur Ritze” on the Reeperbahn. In the few weeks before his suicide, he was depresed and expressed his “thoughts of exodus” to friends. After his death, there was speculation in the press about massive money and drug problems. Hentschel’s urn was buried in his parents’ gave in Ohisdorf cemetary.

Surprisingly, there aren’t any conspiracy theories out there that mullet guy tracked him down, murdered him and made it look like a suicide, but I’m keeping an open mind on that one. I would say RIP Stefan but I can’t help but think how many women might’ve been on the end of his pimp slap too, not to mention the other dodgy underworld activity his Wikipedia alludes to. Probably not too nice of a guy!

For a look back at ‘How Can She Slap?’, one of the most viral clips in internet history – click HERE.