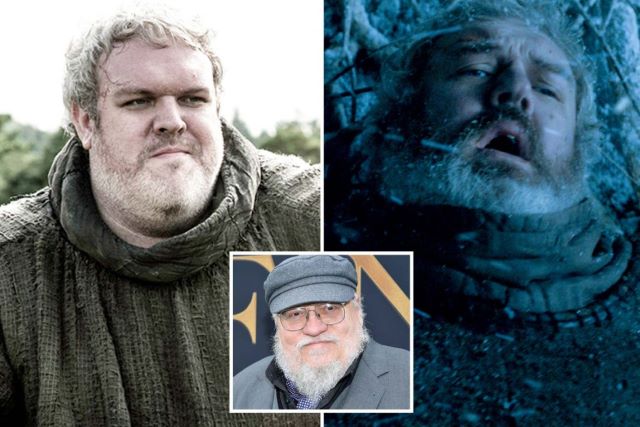 George R.R. Martin has revealed what happens to Hodor in the books and while he essentially meets his fate in the same way as he did in the TV show, the way he deals with his undead attackers is drastically (and violently) different.

As everyone knows, the lovable lump Hodor perished in the season 6 episode “The Door” as he was commanded to “hold the door” and used his weight to block an exit, allowing Bran Stark and Meera Reed to escape.

As Martin told EW, the scene plays out quite differently in his upcoming books:

I thought they executed it very well, but there are going to be differences in the book.

They did it very physical — ‘hold the door’ with Hodor’s strength. In the book, Hodor has stolen one of the old swords from the crypt. Bran has been warging into Hodor and practicing with his body, because Bran had been trained in swordplay. So telling Hodor to ‘hold the door’ is more like ‘hold this pass’ — defend it when enemies are coming — and Hodor is fighting and killing them. A little different, but same idea.”

So basically the story of Hodor ends with him going on a killing spree rather than just using his big frame to block the exit. TBH, I like what they did in the show better. Seeing Hodor wield a sword and chop people up sounds pretty unnecessary when you see how he used nothing but his size and strength and sheer willpower to hold back the horde as they tore and ripped him to shreds. That was probably one of the most powerful scenes in the entire series. Not to mention how much better it communicates the concept of “hold the door”.

So yeah, fair play to the Game of Thrones writers on that one. They actually came up with a better idea than George R.R. Martin himself. Although sure, it would’ve been cool in some respect seeing Hodor chopping down zombies and going out in a blaze of bloody glory.

As for the remaining differences between the TV show and the upcoming books, will GRRM ever even get round to finishing them? Is he even motivated enough considering how loaded he is now? We’ll have to wait and see.

Recently, the actor who played the Night King says he wishes Game of Thrones had ended with the White Walkers slaughtering everybody. Can’t say I disagree with him there.