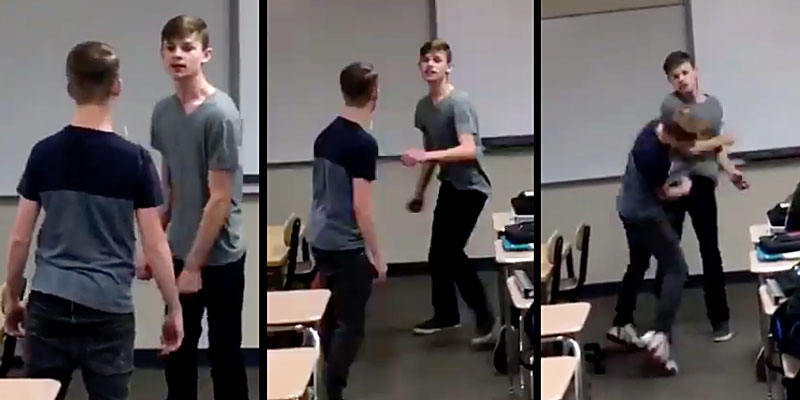 This bully just got rainbow slapped.

A gay high school student named Jordan Steffy is something of a hero this week after finally having enough of his bully and slapping the shit out of him in front of the entire class.

Jordan told Insider that he’d been receiving homophobic abuse ever since coming out 5 years ago, but with this particular bully he’d just about had enough:

He made an anti-gay post with a picture of me on it saying how he hated gays and a bunch of throwing up emojis all over it. I walked up to him and said ‘Why did you post this?’ He said ‘It was just a post.’ And I said ‘Well, it’s not just a post. It’s a post about me, saying how you dislike who I am, and I don’t appreciate that.’

This is the fight 😶 pic.twitter.com/DAsehv9I4m

Great stuff, especially that rainbow slap from out of nowhere. Kids standing up to bullies is the best! OK you might say he only won because the other kid didn’t even try fighting back, which was a weird strategy, but watching Jordan smack him around like that while yelling “wassup?” is so damn satisfying that it doesn’t even matter. Highly doubt that little punk will be bullying him anymore.

Shout out to the teacher for letting it go on for a bit too.

For the London mum who confronted her son’s bully and threatened to rip his whole’s family’s faces off (her words), click HERE.