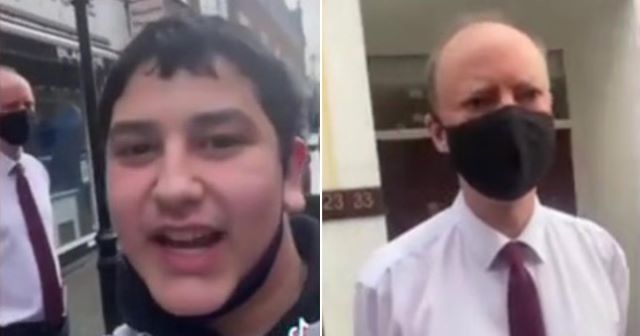 ‘He’s not an anti-vaxxer, he’s a very naughty boy!’

The mother of the teenager who went viral this week for harassing Professor Chris Whitty has embarrassed the lad even further after announcing that she’s taken away his Playstation and is making him apologise to the government’s Chief Medical Officer.

The 47-year-old housewife and mum-of-two told MailOnline that she was ‘horrified’ over the clip and has asked her eldest son to make another video apologising directly to Whitty.

I was horrified when I saw how rude my son was to Mr Whitty.

That is not how I have brought him up and not the behaviour that I expect from him.

The video really upset me and has left me feeling very stressed and anxious. I have not slept properly since I saw it because I was so upset at how he spoke.

I have taken away his PlayStation, which is the thing he loves the most. I have not grounded him because he is already suffering enough from the lockdown and does not go out as much as he used to.

Wow, street cred ruined. Thanks mum! One minute you’re a TikTok badman accosting England’s chief medical officer and accusing him of being a liar, the next you’re a very naughty boy who’s had his Playstation confiscated by his mum. What a fall from internet grace!

Here’s the original clip if you haven’t seen it:

Fair play to the lad’s mum for not grounding him though. Like she says, we’re already in the middle of a lockdown so that would have been a bit OTT, and not even really that effective come to think of it. No Playstation though? In the middle of a pandemic? Bit harsh IMO.

She did add that her boy had been misunderstood:

He is really suffering, as are teenagers all over the country. They have nowhere to go, they can’t socialise like they used to, play football or any other sports.

He wants the Government to do something about it. I think that was the point he was trying to make to Mr Whitty but it came out all wrong.

He wanted to draw attention to the suffering of teenagers, which has largely been overlooked by the Government.

Well done mum. Sticking up for her kid while also pretty much eviscerating him in front of the world. Hopefully once he’s done filming his apology video she’ll return his Playstation because like she says, it’s not like there’s too much else for kids his age to do these days.

For more Covidiots, meet the young lady who was recently fined £200 for uploading pictures of ’empty’ hospitals.