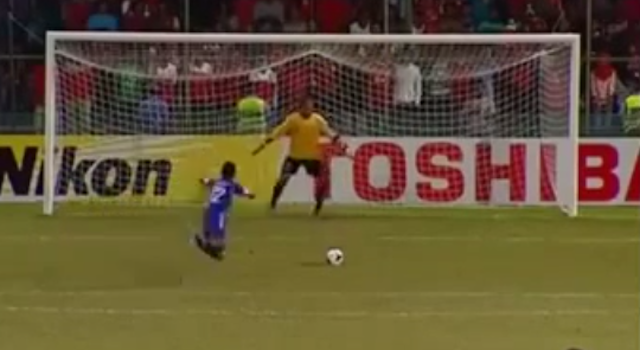 This guy literally falls flat on his face during this penalty.

This is definitely something I’ve never ever seen before and it’s pretty special, although I’m not really sure if it should have counted to be honest.

Afghanistan were playing the Maldives in the AFC Challenge Cup third place playoff (huge game, surprised we weren’t all watching it) and the game went to penalties, and it was there that this happened. The Maldives number 12 – a player I’m ‘reliably informed’ is called Adubarey – managed to fall flat on his face in his run up to the penalty.

Unbelievably, this didn’t seem to phase him and he managed to get up straight away and actually take a pretty sick penalty. The keeper didn’t even move because he was so perplexed at the run up, but even if he had been on top form, I doubt he would have been able to save it. The Maldives then went on to claim third place in the AFC Challenge Cup.

There’s no real other explanation for this, other than the fact that Adubarey is a complete sickhead. Hopefully we’ll see him in the Premier League performing this type of penalty soon. Maybe it’ll even become as well renowned as the Panenka penalty.