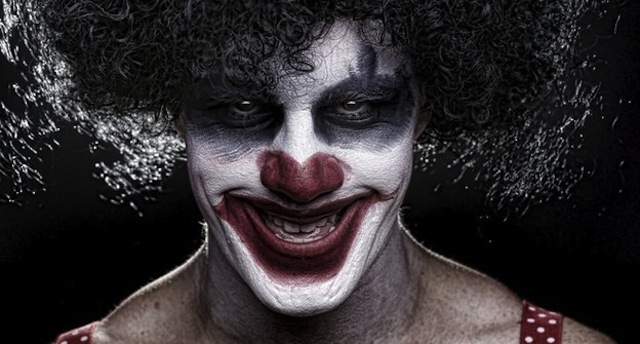 Clown outfits are pretty creepy, but why ban them? Random iron bar beatings, that’s why.

I’m sure there’s no shortage of folks that probably think banning clown outfits is a good idea, they seem to spin people out. I blame Stephen King in the most part, but this horrifying clown prank certainly doesn’t help.

One French town has gone the whole hog and banned clown outfits outright. The small town of Vendargues isn’t just being lame though, they’ve had a genuine problem with people getting dressed up as “bad” clowns and being violent towards random people.

In one episode the evil clown beat a passerby with an iron bar. And it wasn’t just a random swing, they walloped the stranger 30 times in total. That particular naughty clown was caught and got four months in jail, but that wasn’t the end of the clown based drama. There have now been more than a dozen clown related arrests in the town.

According to the police these evil clowns have been seen outside schools, on main roads, in public squares, even hiding in bushes FFS. It’s like they’re multiplying. The attacks even sparked anti-clown vigilantes in Vendargue and the police had to get involved to smooth tensions.

So although the clown ban is actually a bit more sensible than it sounds, the following quote from the mayor is still pretty jokes. He said France wants to…

avoid any disruption… by evil clowns.

It’s about protecting children by preventing any ill-intentioned clowns from mixing with residents.

Brilliant “ill-intentioned clowns”. I love it. So, if you see any dodgy looking clowns over Halloween… actually I can’t give you any advice, they’re probably fine, unless you happen to live in Vendargue, in which case: RUN! But if it’s the Insane Clown Posse having a vox jam, just cover your ears.