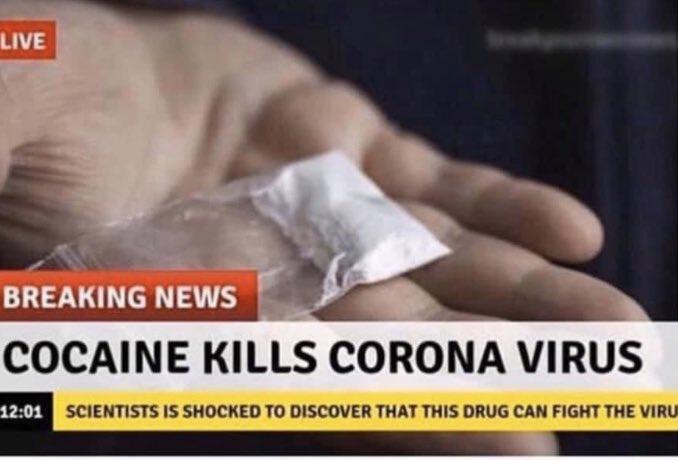 It’s not even midday and we’re already on our second Coronavirus story of the day, after it came to light that so many people actually believed that cocaine killed Coronavirus following a bunch of idiots posting memes about it on Twitter that the French government was actually forced to officially deny it.

The story began when a bunch of doctored pictures of news reports started appearing on Twitter claiming that cocaine could kill Coronavirus. Here’s a couple of the ‘most convincing’:

Yeah, people probably should have realised that these weren’t going to be 100% accurate when one was tweeted from some random location in Nigeria, but apparently they didn’t and the French government were so worried about what might happen that they decided to release the following statement from their health ministry’s Twitter account:

No, cocaine does NOT protect against COVID-19.

It is an addictive drug that causes serious side effects and is harmful to people’s health.

Damn. Bet all the dealers out there – who may even have been responsible for the original meme, who would have thought it? – are seriously gutted that their attempt to turn around what was probably going to be a major lull in business has been thwarted.

Maybe they should just go around promoting people using colour coded straws instead to do lines instead? That will surely help stop the spread of the virus, right?