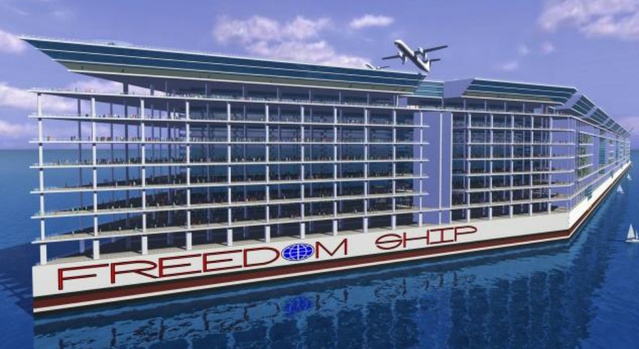 A company is planning to build a one mile, 25 storey floating city that will house 50,000 people. They just need $10 billion first.

A Florida based company called Freedom Ship International have revealed plans for the Freedom Ship –  a mile long, 25 storey floating city that will house close to 50,000 people and live completely at sea,  and will be constantly floating in the sea without ever having to dock.

The ship will include an airport/runway, schools, ballparks and even its own aquarium, which will be different to the actual sea that it’s floating in. Freedom Ship International are also looking to raise $10 billion to build the Freedom Ship.

Crazy right? Who the hell is going to invest $10 billion in a completely mental project like the Freedom Ship, especially in this economy?  Well, it looks like quite a few people actually, at least over the last six months.

Vice President and Director of the company Roger M Gooch – who has to have one of the most suspicious names ever – explained the situation: ‘The Freedom Ship will be the largest vessel ever built, and the first ever floating city. This will be a very heavily capitalised project and the global economy in the last few years hasn’t been too inviting for unproven progressive projects like ours. In the last six months though, we’re getting more interest in the project and we are hopeful we will raise the $1 billion to begin construction.’

Sounds promising, I mean they only need to raise a billion dollars to start construction so it shouldn’t be too hard, right? Look for the Freedom Ship to set sail on the 12th of November in 2000 and never.