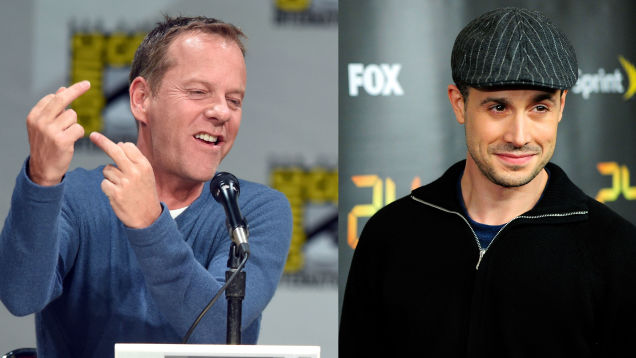 So much so that Freddie pretty much retired from acting.

For some reason, about five years after he actually appeared in a series of 24, Freddie Prize Jr (remember him from I Know What You Did Last Summer and marrying Buffy The Vampire Slayer) has decided to announce publicly that he thought that Kiefer Sutherland was a complete prick during their time together on the show. This probably would have made more sense to come out with in the run up to the new series of 24, but for Freddie decided to keep it under wraps until today. Sure.

Prinze offered the following statement about his time with Kiefer:

‘Kiefer was the most unprofessional dude in the world. That’s not me talking trash, I’d say it to his face, I think everyone that’s worked with him has said that.

‘Kiefer would regularly show up on set drunk … sitting in his trailer often for hours, as everyone waited. It messed with the lives of the family of cast and crew. He was temperamental and got people fired he didn’t like, yet “24” producers consistently cow-towed to him – all they did was keep rewarding him.’

Although I have some sympathy with the fact that showing up drunk to work isn’t really that cool, especially when you’re refusing to work as well, you’ve got to think that when you’re Kiefer Sutherland and you’re THE star (there weren’t really any other regular characters on 24 except Chloe because everyone died after about one and a half seasons, except Tony Almeida or course) of one of the biggest shows on television, people are pretty much going to do what you want. Especially when you’re up against a nobody like Freddie Prinze Jr.

Things got so bad during the show, that Freddie wanted to quit acting (AWAH) after that and started working with Vince McMahon and the WWE because ‘at least they were tall’. Um what? He explains more here:

‘I went and worked for Vince McMahon at the WWE for Christ’s sake and it was a crazier job than working with Kiefer. But, at least he was cool and tall. I didn’t have to take my shoes off to do scenes with him, which they made me do. Just put the guy on an apple box or don’t hire me next time. You know I’m 6 feet and he’s 5’4.’

Right, so the main complaint was that Kiefer was short and you couldn’t wear shoes when you were standing alongside him and now you throw your toys out of the pram about it five years later as you desperately try to retain some sort of semblance in the public eye. Maybe go and compete in a hardcore match if you want people to care about you again Freddie.

For what it’s worth, Kiefer Sutherland’s people fired back with the following retort. Kiefer himself was probably too busy working on the new series of 24 – and working in general – to be bothered with a reply anyway:

‘Kiefer worked with Freddie Prinze, Jr. more than five years ago, and this is the first he has heard of Freddie’s grievances. Kiefer enjoyed working with Freddie and wishes him the best.’