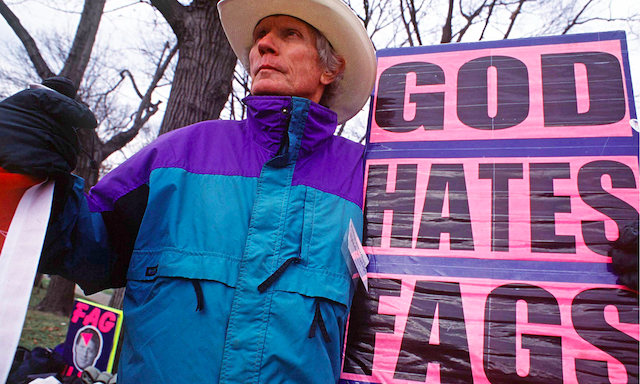 Reports are surfacing that he confessed to his family that he was a homosexual on his deathbed.

Interestingly though, one piece of information that surfaced during his death throes was that he had been excommunicated from the very church that he had created. Although this piqued a bunch of interest, the WBC weren’t really commenting on why it had happened and nobody else seems to know why either.

In the past couple of days though, an interesting theory has emerged courtesy of nationalreport.net that suggests that the WBC itself found out that Phelps was a homosexual himself. I’m not sure how reliable a source nationalreport.net – despite describing itself as America’s #1 source of independent news – but here’s what they had to say, stating that the quote came from Genevieve Phelps, who I’m guessing is supposed to be one of Fred’s daughters or granddaughters or something. Here’s what nationalreport had to say about it:

‘Genevieve, along with several of her aunts and uncles sat huddled around the dying old man to hear him out. ‘He just looked at us all and smiled and said, I’m sorry. I’m gay. Our jaws just dropped, I mean… It doesn’t make any sense. We’re all just praying that this is somehow related to his illness or the medication he’s on. He’s really delirious and half the time he’s not making any sense at all. Regardless, it was very hard to hear after he spent his entire life fighting the scourge of homosexuality in the name of the Lord our God.’

Now, as great and as fitting as this would be – I’m sure everyone reading this has seen American Beauty or any one of the countless other movies/films/real life situations where the person who hates queers the most ends up being caught sucking dick somewhere – I’m not 100% sure if it’s true. This is because the only place reporting it is nationalreport.net like I said, and also because there doesn’t seem to be any information about Genevieve Phelps anywhere on the internet.

Hell, the original article doesn’t even reference how she’s related to Fred Phelps and to be honest it’s kind of written like something that you might find on The Daily Mash or any other satire site and I’m pretty sure that National Report probably is one of those sites and it’s a case of idiots (perhaps including myself) taking it at face value and not actually doing any research about it.

But still – just imagine if it had been true because that would pretty much turn everything the Westboro Baptist Church stood for on its head and completely destroy Fred Phelps and make him (even more) of a laughing stock but I don’t think we can confirm it just yet or maybe even ever. But yeah, here’s hoping we get some more information and it turns out to be true. I mean he had to be excommunicated for something, and what bigger sin did they protest than homosexuality?