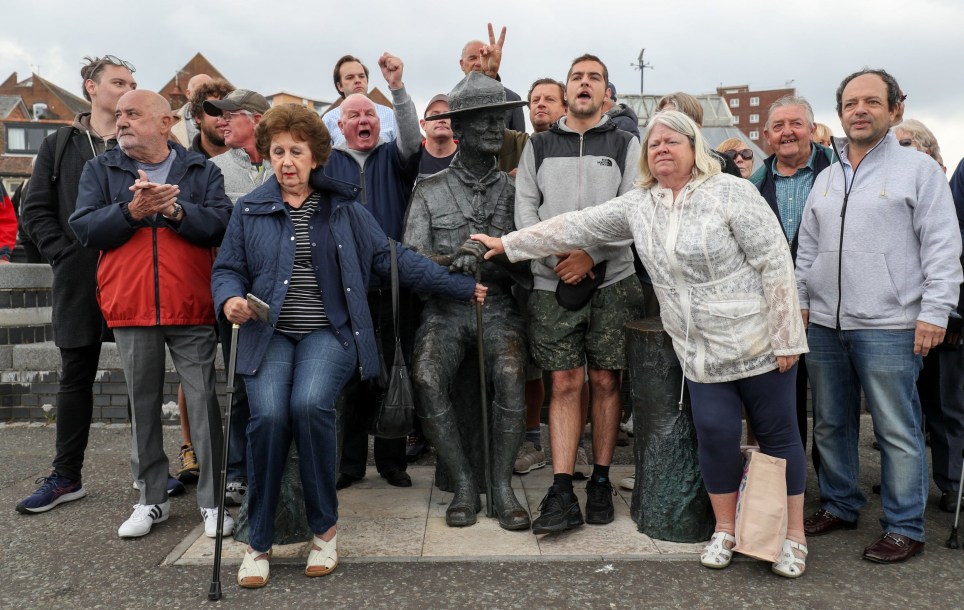 Not sure how your childhood was, but I’m pretty sure that it wasn’t as good as mine if the scouts weren’t involved to some degree.

I spent a whole load of time camping and tying knots and shit like that and I can honestly say it was wicked, but even so I don’t think I’m so into scouting and its legacy that I would spend my free time protecting a statue of the founder of the movement Robert Baden Powell. Of course though, given the latest bizarre narrative twist in 2020 towards protecting statues of racist leaders in this country, this is exactly what a bunch of people in Poole found themselves doing this afternoon.

Powell set up the Scouts in 1907 in Poole and a statue was erected in 2007 to commemorate this, but it turns out that Baden Powell had homophobic tendencies, wanted to align with the Hitler Youth and really enjoyed ‘Mein Kampf’. The council were worried that it might get targeted by protesters as is the woke movement at the moment though and though it might be best to rehouse it for the time being.

That makes sense, but it also stirred the wrath of those in the local community who were stalwart scouts and led them to go down and surround the statue and prevent it from being moved. Here’s what former Queen’s Scout Len Bannister said about it:

If they want to knock this down – they’ll have to knock me down first. It’s absolutely crazy.

Who’s it that actually wants to do it? I’ll fight them off.

I’m actually very angry – and I’m not a protester. I’ve had a lot of enjoyment because of him in my life.

He is the reason I am still here, the pleasure he gives to so many people, they shouldn’t take it down, I will fight them off.

So weird hearing people say that statues give them pleasure. Literally never heard anyone say that before ever Saturday.

Anyway, the statue hasn’t been removed at the time of writing and I think the council are reviewing the decision. I think for a lot of these statues that commemorate people who have done great things but also shared and promoted the antiquated views of the time, the best solution is probably to leave them up but also try to educate people about the other side to the character that isn’t celebrated in popular culture as much.

Still find it completely crazy that people are losing their shit over these landmarks and going down and defending them but I guess nothing should surprise me in 2020. Can’t wait to see what happens next.

For more of the same, check out this statue being toppled and seriously injuring a protester. Whoops.