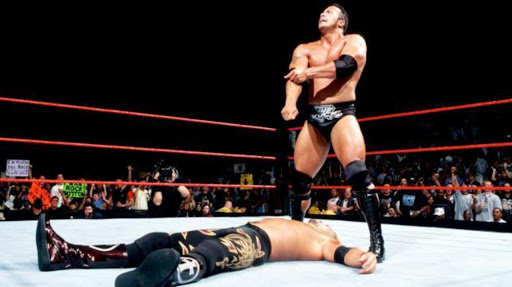 It wasn’t always the most electrifying move in sports entertainment.

Everyone knows that wrestling is a sports entertainment and a bit of a joke when you think about it, but that’s exactly why it’s been able to become so popular all around the world.

One of the dumbest things about wrestling is definitely the finishing moves that don’t even look like they would hurt that much and how they somehow become absolute lethal. The most famous examples of these are definitely Hulk Hogan’s leg drop and The Rock’s People’s Elbow, but it’s interesting to know that the People’s Elbow started off just as a joke to try with The Rock trying to make all the other wrestlers laugh when he did it.

Obviously it became something way bigger than that, but it’s interesting to see this footage of one of the very first People’s Elbows from a house show in Montreal where The Rock was fighting Ken Shamrock. Really weird to see everyone boo it and not be energised by it like they were later on in The Rock’s career:

One of the first ever “People’s Elbow” from @TheRock at a house show in Montreal, 1998. pic.twitter.com/vpJpYsVIgP

Lol. Also really funny to see Shamrock completely no sell it and kick out after a one count. Can you imagine someone kicking out from it on a 1 later on Rocky’s career? Unthinkable. Not even Brock Lesnar could do that.

For the full story of the origin of The People’s Elbow, click here. It’s a really dumb story, like most of wrestling.