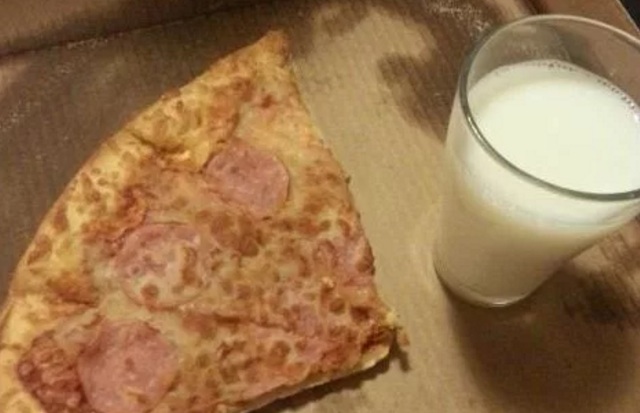 And you thought pineapple was bad.

Pizza has been making the headlines a lot in recent times after the President of Iceland announced he was determined to ban pineapple as a pizza topping.

Since then, people have been coming out and announcing their weird pizza fetishes and if you thought pineapple was an abomination, then you ain’t seen nothing yet.

According to Twitter, a select few people around the world dip their delicious, cheesy pizzas into a cold glass of milk. Willingly. I know right? That’s totally fucked up.

Just WHY? There’s nothing desirable about dipping your pizza in milk – it’s simply all kinds of gross. Predictably, the Twitter community was not impressed:

You just wasted a perfectly good slice of pizza how dare you https://t.co/1KuM3JDE1n

@strictmachine PIZZA IN MILK IS POISON

Pizza & Milk? Everyday we stray further away from God's light

Pizza is cancelled for the rest of the year since y'all don't know how to behave https://t.co/W67oqzAx1f

Some damn milk and pizza. pic.twitter.com/ELn605nuHt

I have to agree with Scott S on this one. PIZZA IN MILK IS POISON. It should never have happened.

Same goes for this pea and mayo monstrosity. Sort it out everyone.