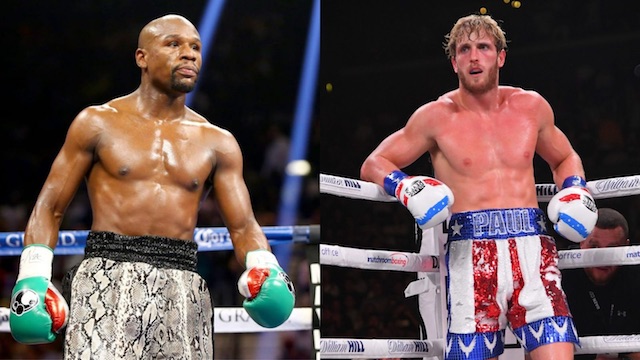 Fight of the century.

As if 2020 couldn’t get even more ridiculous and stupid, it seems like Floyd Mayweather has agreed to come out of retirement to fight YouTuber Logan Paul.

Floyd took to Twitter last night to announce the news, saying the following:

These YouTube girls better find some Barbie dolls to play with cause I’m not the one for the kid games. 3 years ago a fighter from the UFC said my name and I had to put a muzzle on that bitch. @loganpaul can get the same treatment before I go conquer Japan again.

OK, so that isn’t exactly a 100% guarantee that the fight is going to go ahead, but it seems as though this is what’s going ahead as a number of sources – including YouTuber Keemstar and The Fighting News’ Mike Feinberg – are saying that a contract has been signed and the fight is definitely happening.

Of course, this is a complete and utter joke of a boxing match as Mayweather is arguably the greatest boxer of all time and he’s going up against a guy who has only ever fought against one other guy and lost. Logan Paul hasn’t even won a single professional boxing match, let alone enough to go up against a legend like Floyd Mayweather.

Money talks though obviously, and I think everyone stood up and took notice of how much of an event that Logan Paul/KSI boxing match was and how much money it made. Floyd probably just sees this as a great opportunity to get paid millions of dollars to barely break a sweat whilst he beats the shit out of someone. Decent work if you can get it.

As for Logan Paul, he’s going to get his profile amped up even more and make a tonne of money out of getting his ass whooped for a few minutes. And of course there’s the chance he could hit Floyd with a lucky punch and knock him out right? You’ll be tuning in, even if it’s just to see him get pummelled.

For more of the same, check out when Floyd Mayweather completely dissed 50 Cent. That was one for the ages.