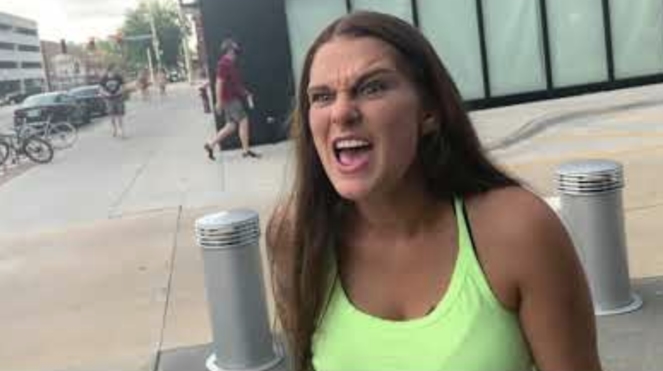 We’ve shared a whole bunch of paedophile hunter/vigilante videos over the years from organisations like Dark Justice, but I don’t think we’ve ever featured one that involved a female predator being busted on camera before.

Well a group known as D.A.P (Dads Against Predators) have released footage this week involving a female in Iowa who was chatting to what she thought was an underage girl. Her plan was to arrange for her boyfriend to have sex with the minor in a hotel room as she watched, and maybe get involved herself as well? Who knows. Here’s the footage:

Yeah I’m not really sure what she was thinking with the whole “wipe the phone” excuse as that just makes it clear she knows what she did was wrong, but top marks for at least trying to explain her way out of it. Pretty sure she’s also a meth head and might have even been tweaked out a little bit in this video, but that’s neither here nor there.

Unfortunately there’s no update from DAP as to what happened after the cameras stopped rolling, but it looks as though they got in touch with the police so I suspect this woman will be under investigation. TBH I don’t think these DAP guys are as polished as their UK counterparts and don’t deal with the situation as well as say Dark Justice or Guardians of the North might have, but at the end of the day they’re still doing important work tracking down would-be paedos like the Karen in this video. Big up!

To watch a paedophile faint after being busted by Dark Justice for trying to meet a 14-year-old girl, click HERE.