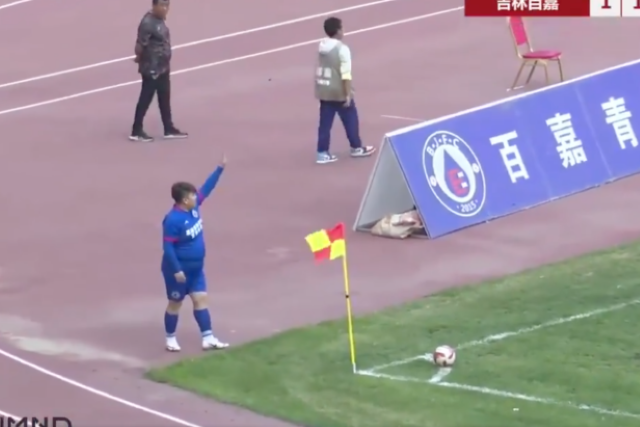 The highlight reel is finally here.

A couple days ago we wrote about the Chinese businessman who bought a football club in the Chinese 2nd league and made the coach play his 126kg son.

At the time there was only one hilarious photo of the guy doing the rounds, but sure enough we now have actual footage of him playing on the pitch, and it’s everything you imagined it to be…

You know that businessman that just bought a Chinese second tier football team and made them put his son on?

Here are his lads highlights 😂😂 pic.twitter.com/Xt9VX7kvCW

Chinese businessman bought Zibo Cuju, a second tier Chinese side, and told the coach to play his son.

Loving the confidence. Yeah OK he did give the ball away a bunch of times for the 15-odd minutes he was on and couldn’t be bothered to track back whatsoever, but his set piece deliveries weren’t too bad. The best part though is how he keeps trying to direct traffic like he’s Ronaldo and keeps placing the blame on others. Too funny!

Just a shame they ended up conceding that late goal and losing 2-1 otherwise it might’ve been a fairly successful little cameo. At the end of the day though there’s not really much point in being a multi-millionaire Chinese businessman if you can’t buy a professional football team and insist on your 126kg son playing every game, so fair play on that one. Maybe hook him up with a personal trainer as well and who knows? He might become halfway decent.

For the US footballer who sparked a massive brawl after scoring the game-winning goal and then mocking the goalkeeper for faking an injury, click HERE.