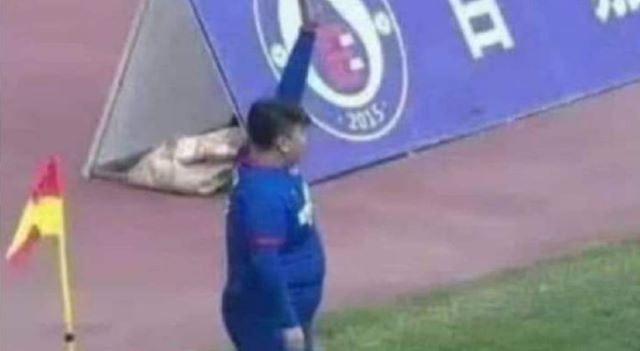 How’s this for a power move – a wealthy Chinese businessman has bought Zibo Cuji FC, a club in China’s second league, and insisted the coach play his 126kg son.

According to Newsline, the stipulation is that the boss’s son must participate in all games within 90 minutes. At first look it doesn’t seem to be going too bad, as evidenced by the scoreline in this photo; a 1-1 draw in the 80th minute…

Reckon it might help if they take the 126kg dude out of the team? Who knows, he may have a touch like Messi for all we know. At the very least he has amazing belly control – probably receives a long ball like a magnet.

Would need to see some video footage of him in action to give an informed opinion though, but unfortunately there doesn’t seem to be anything out there. In fact all I can find on the story is from Newsline, Reddit and a bunch of mentions on Twitter.

Funnily enough there’s also a recent story about the owner of Zibo Cuju subbing himself onto the pitch against Manchester City’s sister side Sichuan Jiunu while rocking the No 10 shirt, so it looks like he’s really making the most of owning his own club, even if it’s in the second tier of Chinese football.

You can almost respect this level of corruption compared to the usual FIFA shenanigans and dodgy dealings in the world of football. At least this is hilarious even if it probably isn’t doing the side any favours on the competitive side of things. Maybe he’ll make it up to the team by investing a few quality players to make up for his 126kg son taking up space on the pitch? Yeah, fat chance.

For the leaked video of Arsenal star William Saliba filming his teammate having a wank in the locker room, click HERE. Normal.