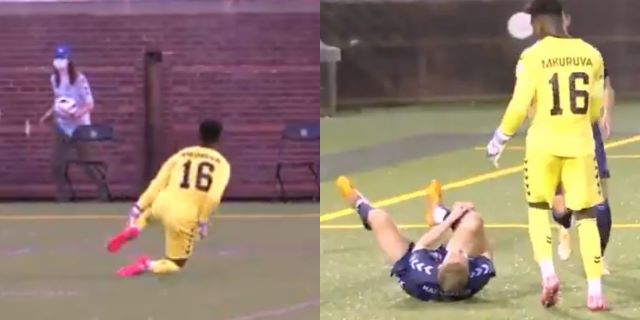 If you’re going to fake an injury, make sure you win the game.

It looks like US football teams are really starting to learn from their European counterparts, faking injuries at every turn and taking the mickey out of each other at pivotal moments of the game.

In this clash between Chattanooga FC and Michigan Stars, the Michigan goalkeeper had performed maybe the most pathetic fake injury flop of all time. At the end of the game, it came back to bite him when Chattanooga star Markus Naglestad scored the late winner:

The highlights from @ChattanoogaFC’s last second win over @DetroitCityFC this weekend are unreal. My guy @Naglestad10 is a hero. Don’t start none won’t be none, keep! pic.twitter.com/1T0CiXruQE

Since day one I have felt nothing but love from everyone involved in this club and I want to apologize to the portion of fans, co-owners, and others who felt that my celebration did not represent the values of this great club. Context: pic.twitter.com/jLFEpPzf2n

I like to think Markus isn’t really sorry because come on, that was funny. Talking shit and mocking your opponent always makes football games more interesting. And after all, it would never have happened if the goalkeeper hadn’t faked an injury in the first place. If you’re going to fake an injury, at least make sure you win the game.

What I’m wondering is how spontaneous Markus’s celebration was. Did he have that planned out from the moment he saw the keeper writhing around in fake pain? From the moment he put the ball down on the penalty spot? Or did it occur to him after the ball went into the net? Either way, love how he made fun of the keeper to his face rather than jot down some vague remark on Twitter afterwards. More of this please, footballers!