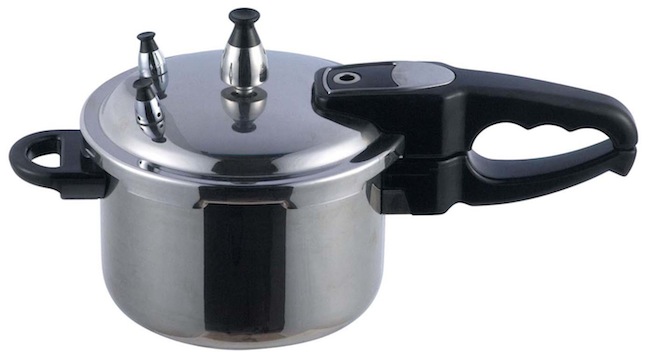 The US isn’t taking any chances when it comes to sniffing out potential terrorists, even when someone just wants to find something they can cook their lentils with.

Legendary gonzo journalist Hunter S Thompson once said that paranoia is just another word for ignorance. Such a quote seems particularly relevant when you consider the plight of Michele Catalano, a freelance journalist living in the United States who had Uncle Sam knocking on her door this week after she committed the highly treasonous act of looking for cooking devices online.

Relating her experiences via an entry on her blog, Mrs Catalano was at work when The Man came calling, but her husband wasn’t, leaving him in the delightful position of being at home when three ominous black SUVs pulled up on a Wednesday morning and an assortment of anti-terror agents got out before knocking on his door, asking if they could come in and searching the premises. Thankfully, full cavity searches were not required.

â˜› More Web Stuff: The Amount Of Online Activity That Goes On Every 60 Seconds

Weeks previous to the G-men’s arrival, Mrs Catalano had been browsing pressure cookers online. This, coupled with her husband’s search via the internet for a backpack and her 20-year-old son clicking on news stories about the Boston bomber set alarm bells ringing as pressure cookers are just one of many household components you can use to make your own bomb. The end result was a house call from the authorities. At one point, things take a turn for the blackly comic when the full extent of the Catalano’s kitchen activities is revealed;

Quinoa?! That sounds like the sort of weird foreign muck the Taliban would eat! Mr Catalano is lucky they didn’t slip a black bag over his head there and then and whisk him off to Guantanamo Bay. A short while and a handshake later, the Feds decided there was nothing to see here and moved on. Incidentally, they informed Mr Catalano that “they do this about 100 times a week. And that 99 of those visits turn out to be nothing.” Good to know.

â˜› As If Your Faith In Humanity Wasn’t Bad Enough: 10 Films That Will Depress The Shit Out Of You

Interestingly, despite Mr Catalano’s clams that the officers visiting him claimed they were part of the Joint Terrorism Task Force, a statement from the FBI after the event reads:  “she was visited by Nassau County police department…They were working in conjunction with Suffolk County police department.”  Make of that what you will.

Thankfully, most of Sick Chirpse’s online searches are for the kind of things that would lead to you to believe you were dealing not with a terrorist but an over-stimulated teenager. Still, we did have to Google a pic of a pressure cooker to go with this story. Should we expect a knock at the door soon?

â˜› Stick It To The Man: Watch The Wikileaks Documentary Online