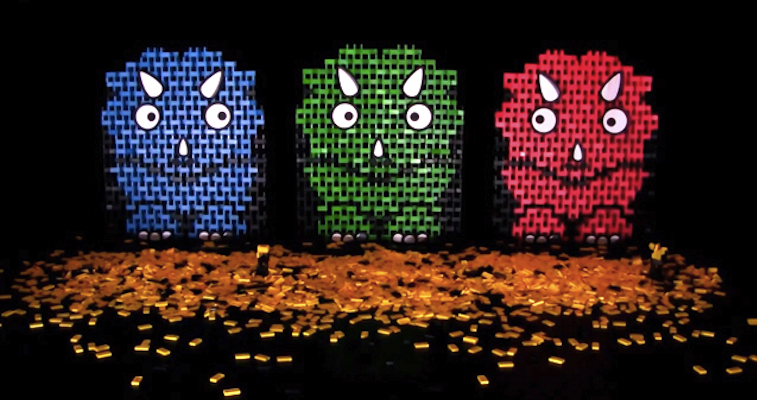 This is one of the most epic domino videos I have ever seen. 40 hours of set up for 1 minute of footage but it’s just about worth it.

This is kind of a cool video in so much that it features dinosaurs and dominos which are both obviously really cool. According to the guy who set it up on his youtube channel it took 38.5 hours to set it up and he did this in his spare time over a two week period. That’s a long time setting dominos up guy. I guess it was kind of worth it though as he gets almost 90 seconds worth of footage of dinosaurs imploding and the world imploding too. So that’s roughly like half an hour of work for every second of footage. This dude must really like dominos and has probably dreamed of doing something like this for years so I guess it’s cool that he finally set it up. Gotta follow your dreams bud.There isn’t really much else I can say about the video other than it’s kind of fun, so you might as well check it out.

There’s a bunch of extras after the actual 90 seconds of footage but it mainly just shows the dude setting up all the dominos which isn’t really that interesting. Some text comes across and says ‘stay tuned for a MAJOR ACCIDENT’ which had me kind of excited because I thought the dude might knock the dominos over and flip out and go crazy or something but it’s nothing like that, it is a major fvck up but you dont’ even see the guy’s reaction which is pretty disappointing because you gotta think if he spent that long setting it up it’s gonna be pretty soul destroying to see it all go down and then to have to do it all again. But nah he just does that again. I guess you gotta have the patience of a saint to be in the domino business. Check it out below, the major accident is around 2:30 if you can’t be assed to watch it all: