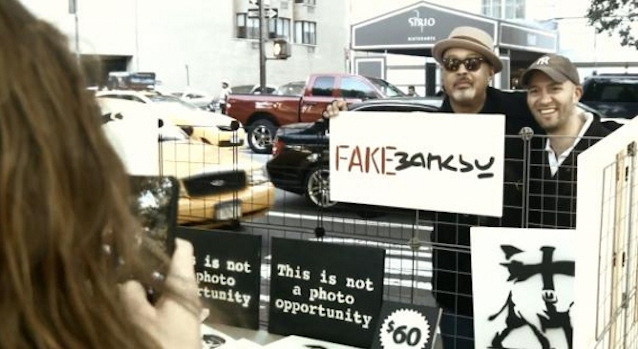 Banksy set up a stall in Central Park last week and couldn’t sell any of his art, so what happened when someone set up a stall advertising knock off fake Banksy pieces this week?

Last week we ran a story about how Banksy set up a stall selling his paintings in Central Park and only managed to sell pieces to three people in a whole day of trading, making something like $400 instead of the $4 million the collection was probably worth.

He specifically said that the stall wouldn’t be re-appearing, so New York trio Dave Cicirelli (a hoax artist), Lance Pilgrim (an event promoter) and George Gross (a filmmaker) decided to test the residents of New York by setting up another stall selling Bansky style prints in Central Park to see how they would react. And guess what? That’s right – they sold out of their entire stock in one hour.

The best part about the prank though was that they actively distanced themselves from Banksy and his work and made sure that everyone who bought a piece knew that they weren’t actively associated with him and his art. Everyone received a verbal warning, there was a massive sign on the stall saying specifically that they weren’t actual Banksy prints, and everyone who bought one was given a special certificate of inauthenticity as well.

However, punters either didn’t care or just thought that this was another prank from Banksy himself, trying to discourage people to buy his artwork, and instead lapped it up. Cicirelli explained:

‘It didn’t matter. We sold everything in less than an hour. Including the price sign. We wouldn’t have sold any, if not for the media hype around Banksy. That was kind of the point–we wanted to complete his statement about the nature of hype and the value of art. Banksy’s stunts have created a haze of uncertainty around everything, and we created ‘Fake Banksy’ within that haze.’

No word yet of what Banksy thought of this, but I’m sure he probably really enjoyed it.