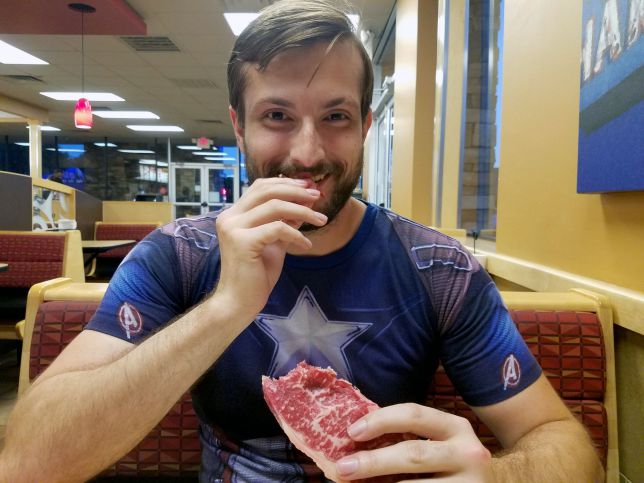 Hell of a lifestyle change.

Yeah, I haven’t heard of anyone doing that before ever either, but that’s exactly the path that 26 year old Andrew Graf took and he claims that it’s responsible for his dramatic weight loss. The Texan says that he tried many different diets in order to lose weight and stop feeling unhappy, but the raw meat was the only one that allowed him to drop eight stone:

I tried veganism, high carbs, calorie restriction, and excessive exercising but nothing was doing it. When I heard about the carnivore diet I thought it sounded nuts.

But I gave it a try I could not believe the difference. 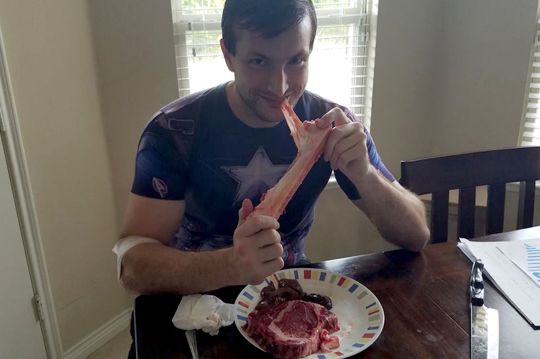 Whatever works for you dude. On an average day, Andrew eats between one and two pounds of meat, usually in one sitting so that he doesn’t have to worry about eating raw meat when he’s out and about with friends. Good plan man, yeah for sure.

Although there are some side effects to the diet – Andrew admits to having suffered from constipation, foul breath and rashes because of it – he says he prefers it to feeling bloated, constipated, and lethargic when he was following the vegan version. Seems like he just can’t get away from the constipation problem though eh?

But yeah whatever you think about it you can’t really turn your nose up to the fact that he’s dropped from 21st 4lbs to 13st 5lbs as a result of following it. Not sure it’s going to encourage me to follow it though. Same with veganism. Just a bit of everything really – can’t go wrong.

For more raw meat, check out this guy in his cloak in North Carolina. Really weird behaviour.