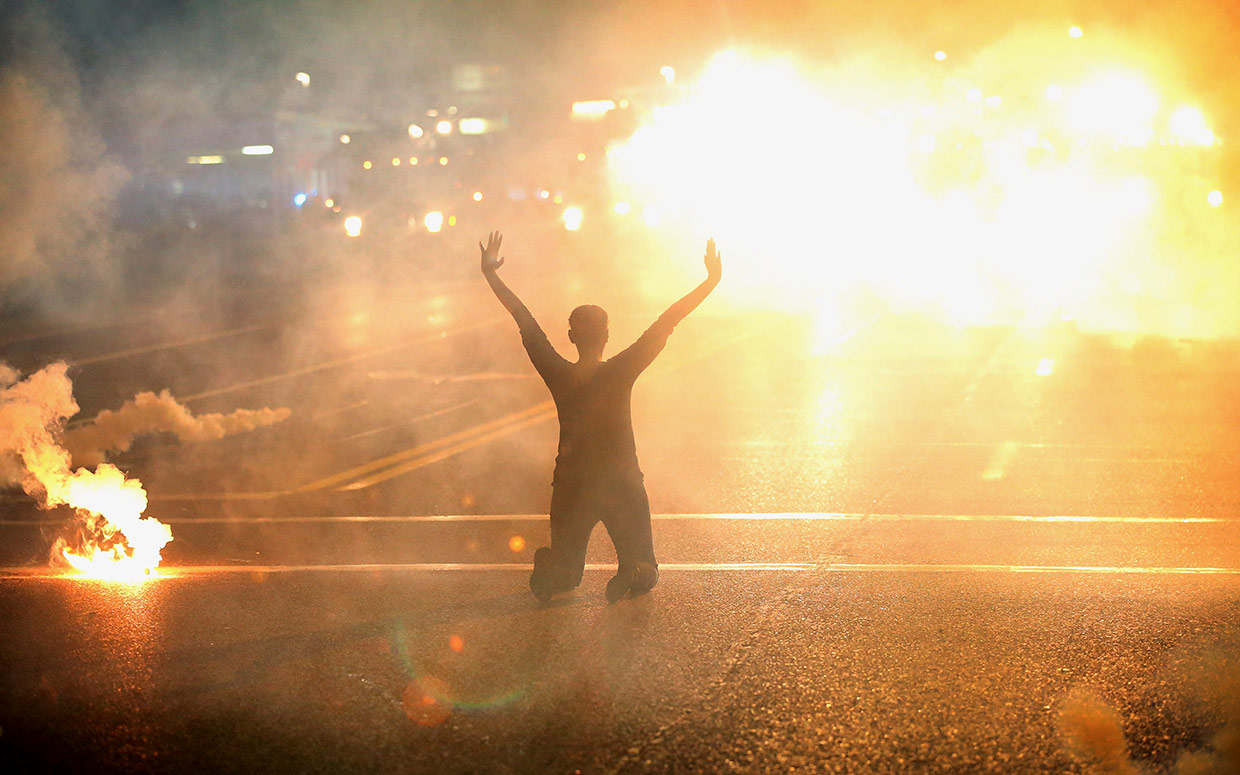 The truth is disturbing.

We’ve been featuring the troubling events in Ferguson over the last few weeks. It’s an important issue because the USA likes to tell the world that it’s the leader and the best at everything. When we see the truth revealed in events like police shootings of unarmed people, it shows the world just how full of crap America really is. Lets take a moment to dissect what been happening there and just why this really isn’t new.

America was founded on racial abuse and subjugation, so events like what occurred in Ferguson, Missouri should be little shock. A little known fact is that several highly educated people of African decent actually helped the Colonists draft the Articles of Confederation and helped found the USA. This of course has been shuffled away into archives and forgotten. So-called black people have been in the Americas just as long as so-called whites. While logical and decent folks have no issues with other ethnicities and races, here in America its always been an issue.

The fact is that at least once a day someone in the USA is being shot by the police. Seriously, every single day someone is being shot BY THE POLICE. The use of force is so common these days that many people of non-white decent assume the worst when cops are nearby. Rightfully so when all you know is constant harassment, beatings, muggings, rapes, murders, and false arrests. Yes, I said muggings too. Many people report being robbed of jewelry and cash by police in more ethnic neighborhoods. So the level of abuses are not small by any means.

Now take a moment’s pause to have a laugh and see just how insane it is for black folks in the USA. Video clip from Jon Stewart’s Daily Show.

Statistically, extra-racial killings are actually decreasing in the USA as a general issue. However, do not let the hype cloud what’s going on here. Yes it’s a racial issue, but it’s also more about police abuse of power. Post 9/11, the USA has become and Orwellian style climate. We have the molesty TSA, nosy NSA spying on the entire internet, and the police now rocking military weapons and hardware. If we had a time machine and brought someone from 100 years ago to today they would be shocked and horrified at how low America has actually gotten. Make no mistake though, the USA is still doing better than some nations such as Iran, North Korea, or China. 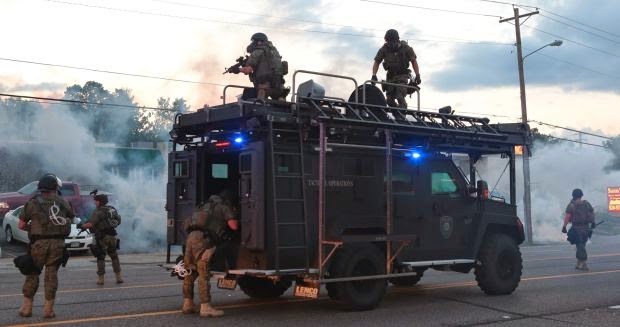 Mike Brown (unarmed) was shot multiple times by police officer Darren Wilson on August 9th, 2014. This is but one of the latest killings by police in America. Just three days later another black man (Kajieme Powell) was shot and killed just four miles away from Ferguson. Statistics show that at least twice a week a black man is shot and killed in the USA by police. Everyday of every week or every year someone loses their life from police in the USA. I’m beating this fact over and over because this is the primary issue at hand here. Even with the long history of racial divide in the States, more recently the police and federal government have launched an unofficial campaign of violence against their own citizens of all ethnicities.

The police seem to have this “us VS them” mentality that developed over the decades and it shows no signs of abating. We got to see this first hand in Ferguson when the police from the entire AREA converged on the local suburb with full tactical gear, APCs, assault rifles, tear gas, rubber bullets, and extremely aggressive force on protestors. Sure, there was two days of looting (a dozen or so people) and a few protestors that threw bottles at police. But this does not ever mean that the level of force dropped on this mostly peaceful suburb was legal or necessary. 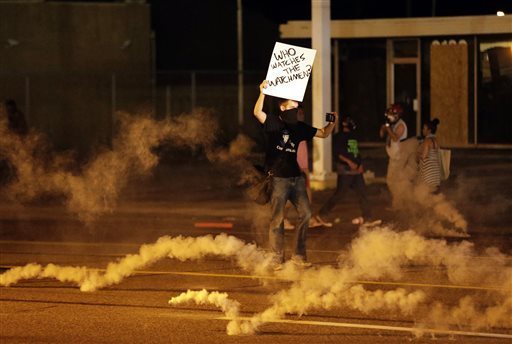 Not even the news media is safe from these assaults anymore as we saw massive violations of the USA’s 1st Amendment by police. For a those who don’t know it reads:

Congress shall make no law respecting an establishment of religion, or prohibiting the free exercise thereof; or abridging the freedom of speech, or of the press; or the right of the people peaceably to assemble, and to petition the government for a redress of grievances.

They fired tear gas at reporters from Al-Jazeera as well as many other agencies and you can see below.

I watched a combined 10 hours of the protests via live streams that were up and constantly heard the police threatening journalists and protestors alike with arrests for being “unlawfully assembled”. Reporters were hit hard by the tear gas and had to fall back to the designated media area to get their faces drenched in milk and water. I’ve never been tear gassed and I’m pretty sure I would die of death if I ever was. Seriously, I hear that shit sucks and can affect you for hours on end. 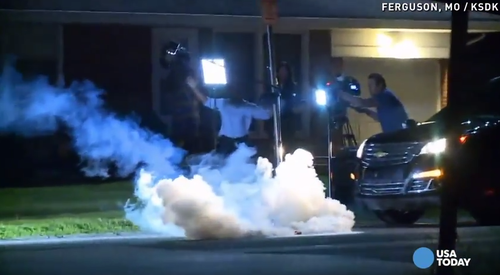 Another issue we see is just how far divided America can be when it comes to race. After the shooting death, well murder of Mike Brown the internet exploded with racist comments and almost immediately fund-raisers went up to support the people that killed him. 12 days ago a gofundme was launched in support of office Darren Wilson. They have raised a massive $400,000 so far, while in support of the victim has only seen $300,000. Fox News has been especially ridiculous and frankly all out racist if you ask me. But I’m not the only one that thinks their coverage of the situation was highly questionable. Check this link out of Jon Stewart utterly destroying their credibility.

Another issue to think about is just how ridiculous the media coverage has been on this incident. There was literally a dozen people or less looting and they made it seem like the entire neighborhood was stealing hair weaves and booze. Then AFTER people were being tear gassed they broke into a McDonald’s to get milk for their burning eyes. But the media seems to have this issue with the dramatic and continues to repeat videos of the police violence and one or two violent protestors. That’s not what I saw from watching it live from Vice News and Argus Radio streams. I saw hundreds of peaceful protestors under attack by the police looking like something from RoboCop. 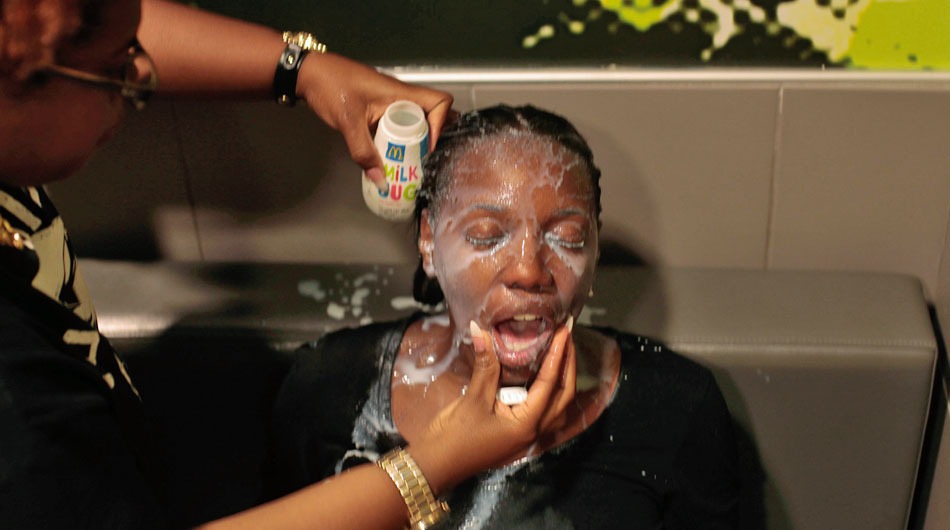 To sum it all up, yeah there is a lot of racism in the USA and police forces. But in my opinion and from what I have seen, most of the racism lies in the deep south and in the older generations. Most of the white people I know under 40 are good decent people who don’t go out of their way to be total knob heads to people who don’t look like them. In fact, most folks I know are outraged that shootings like this still happen and that the police get away with it. So even though it is a mess in Ferguson and all over the USA, it’s actually getting better.