Ever since you were allowed to promise you’ll do something on Twitter, people have been making stupid promises and being forced to follow through with them when what they’re betting against actually comes true.

The latest of these is an England fan named Dan Welch, who stupidly predicted that England wouldn’t be able to make the quarter finals and said that he would get the whole squad tattooed on his leg. And to be fair to the guy, who actually went and did it after we beat Colombia on penalties. Bet that was an even tenser affair for him.

Anyway, here’s how the story played out on Twitter:

Putting my neck on the line , but if @England get to the quarter finals with that squad, I will get the 23 man squad names tattooed on me. #EnglandSquad #WorldcupSquad

Save @in me, I lost the bet.. I’ve been sponsored 115£ so thanks to everyone for that, I will be in the chair Thursday 8pm, if you wanna come record it please DM me comeeeeee on https://t.co/8ZatPYQM2I

Hope my Mrs don’t go into labour mid tattoo.. then I am fucked

Stuck Southgate right at the top of the list, it’s fully deserved 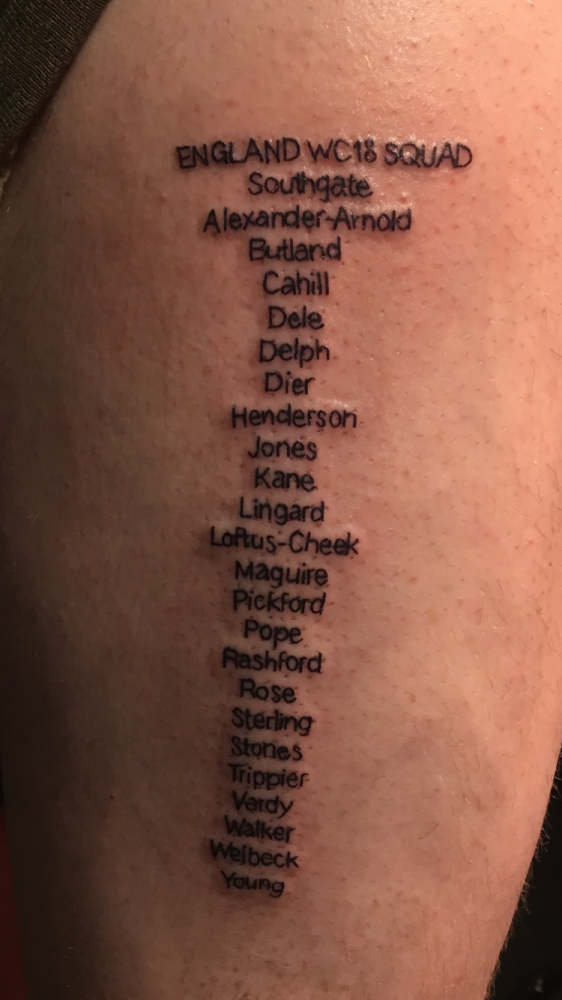 I mean I guess you’ve gotta say fair play to the guy for going through with it, even though it’s an absolutely terrible tattoo. It was bad enough getting the whole England squad tattooed on him but he could have at least got it in a nice font so it looked a bit more awesome. Kinda looks like a baby has just scribbled it on him when it looks like that though. Kinda surprised he didn’t get ‘it’s coming home’ tattooed underneath it though.

Best part about it is definitely that he was worried about his missus going into labour whilst he was getting it done. That is just such top class lad banter – you couldn’t have written it any better if you were writing it on a lad banter satire site. Love it.

For more of the same, check out this idiot who already got an ‘England World Cup Winners 2018 tattoo’. We still believe.