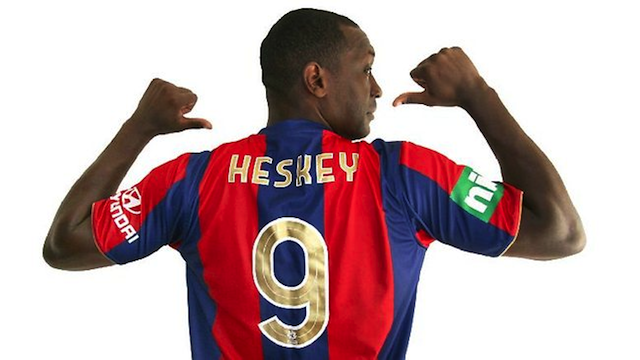 Even though Emile Heskey has gone from zero to hero in Australia, it seems that some old habits still die hard.

Nobody was too surprised at the end of the 2011/12 season when Emile Heskey decided to fuck off to Australia to play over their and try and regain some dignity in the last years of his career. What was surprising though was that his club the Newcastle Jets sold out of Heskey shirts in record time, and also that the fans loved him so much they started a chant that went ‘Heskey’s bitch, Heskey’s bitch – you are Heskey’s bitch’. It seemed that the much maligned Englishman had finally found a home.

Unfortunately, it seems that even though the fans love him he’s still the same shit Emile Heskey, as this miss from the weekend shows as his teammate sets him up perfectly with pretty much an open goal to shoot into, only for him to spank it over the bar from about five yards out. There’s only one Emile Heskey.

NB – you’ve also got to really love the commentary in this one: ‘you’d have staked your life on Emile Heskey bulging the back of the net from there’ – er would you really? Really!??!