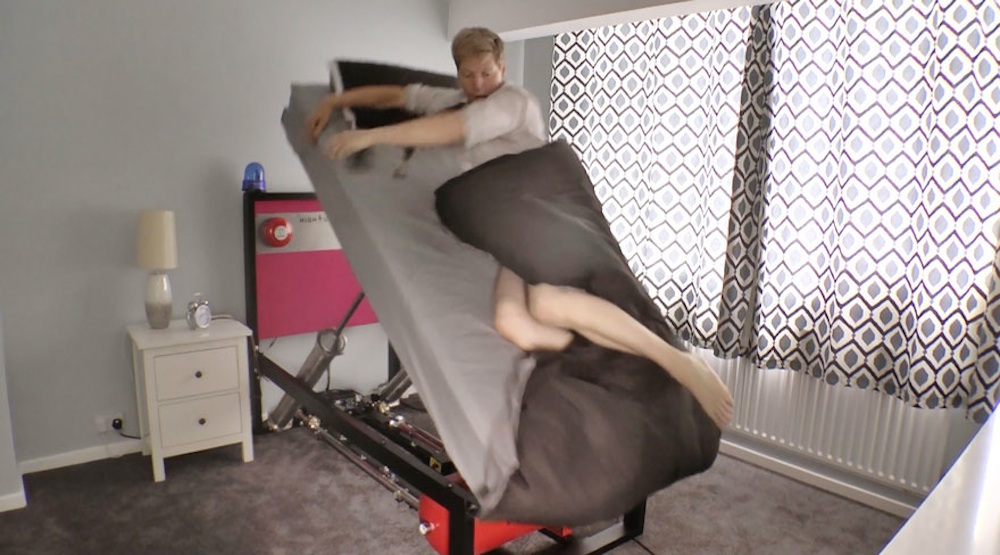 If you’e got a problem with the snooze button, then this is the bed for you.

Getting up in the morning is always difficult, and it’s normally even more difficult if you know you’ve got to go to your shit job that you hate for the next eight hours, which is what most of us face on a regular basis.

So it makes sense that someone would actually invent one of those ejector beds from Wallace And Gromit to get you up and out of bed the moment your alarm goes off – there’s no time for a snooze button here. The guy is a mad inventor called Colin Furze – who actually made some Wolverine claws a couple of years back – and true to most of his inventions he’s made it out of his garage with parts that anyone can find.

The main ejector boost uses a domestic compressor that powers the home made pistons to throw you out of bed. If you position your shorts/trousers on the end of the bed you can even slide straight into those, or if you really positively have to get up and no is absolutely not an answer, then you can programme it to throw you all the way against the wall. Perfect – although I think it would be better employed as a bed to prank people to be honest rather than one I would use of my own accord.

You can see a video of it in action, as well as a behind scenes video below. It’s actually a fairly clever promo video for Taylor’s of Harrogate Coffee, who kindly sponsored Colin to make the bed. Fair enough really, because it’s gone viral and everyone’s seen it and knows their name now – this is basically how you create a viral video.

Between this and the shower curtain that kicks you out of the shower in four minutes, you’ll never be late for work again. If that’s something you want to be, then I advise you invest in both of them immediately.