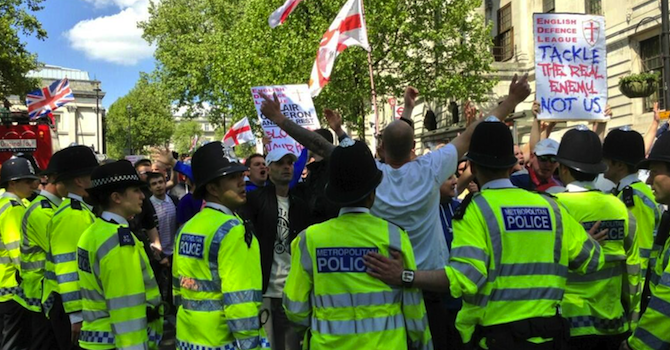 Never content with not being dicks, the EDL have invited the Abbot and Costello of bigotry over for tea.

The recent, grisly, public murder of Drummer Lee Rigby on a Woolwich street didn’t just throw racial divides in the UK onto a global stage, it also acted as a casus belli – or perhaps that should be casus bellend – for the English Defence League (EDL) to embark upon yet another misguided, poisonous – and above all, dangerous – campaign of hate filled fuckwittery.

In the immediate wake of the murder, the EDL called on its supporters to ‘mobilise‘, leading to protests in Woolwich, mosque vandalism and a slew of other anti Islamic aggression across the country (and, predictably, all over Facebook) that Tell Mama (Measuring Against Muslim Acts) placed at a final figure in excess of 200.

Now, the EDL are once again making their beloved England look like a total dickwad to the rest of the world. On June 29th, the EDL will be hosting a demonstration in Woolwich – though their site claims this is no longer a demonstration, it’s just a ‘walk’ (that’s a link to the EDL site, in case you don’t want that in your history) – to coincide with Armed Forces Day. They’re calling it The Walk of Honour (no joke) and it’s in honour of Lee Rigby, black pudding, cricket, Spitfires, bulldogs and whatever else racists have neck tattoos of.

The bigger issue, and where the EDL have let themselves down, the class down and the whole school down is their special guests; prolific Islamophobes and founders of Stop Islamization of America, Pam Geller and Robert Spencer. Their highlights reel includes:

What the EDL have done is find the biggest possible stick they could, walked up to a beach ball sized wasp nest and prepared to beat it like a dusty carpet. If do-gooders and well-meaners have their way, the Richard and Judy of bigotry won’t be allowed into the UK. One thing’s 100% for sure, however: the EDL are dicks.