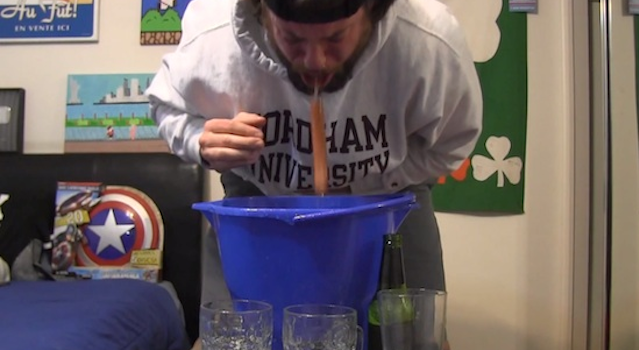 If you eat a hot dog whole, you throw up a whole hot dog.

We’ve featured L.A. Beast and his ridiculous eating challenges on the site before but they’re only really worth talking about when they’re actually ridiculously stupid, which isn’t too often. This one definitely falls under that category though.

For some reason L.A. Beast thought it would be a good idea to try and eat a whole bunch of hot dogs without chewing on them, essentially swallowing them whole. Or inhaling them, whatever you want to call it. I don’t know why he wanted to do that and neither does he really because the only explanation he offers is because he’s fucking stupid, naturally.

Anyway, the whole thing is pretty much gag inducing to watch, especially when he swallows a hot dog whole and then pukes it up whole a few seconds later. Somehow though L.A. Beast manages to complete the challenge – albeit in a slightly longer time than he allotted for it – which you have to give him respect for because it must have been absolutely disgusting, especially if you know how a hot dog is made.

However, you’ve got to wait around until the end of the video for things to get really good as he vomits whole unchewed hot dogs out of his mouth for about a minute. I’ve never seen anything like it before. Don’t try this at home.