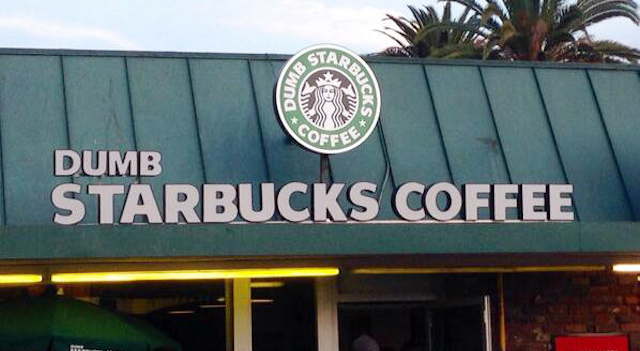 Dumb Starbucks has opened up in Los Angeles and is offering its customers free coffee, but nobody can figure out why.

Over the weekend, a new coffee shop opened up in Los Angeles called ‘Dumb Starbucks’ and its existence is perplexing the residents of Los Feliz and also becoming a bit of a sensation on social media.

The company claims that it isn’t affiliated with Starbucks in any way shape or form and is merely using its likeness due to parody law, which means that it is perfectly entitled to rip it off in this way. There’s a FAQ included in the photographs of it below that explains this more clearly, but it still seems really weird. Nevertheless, residents of Los Feliz have been loving the place as they are offered free coffee all weekend, and the queue to go in and grab some extends around the block. It’s unclear whether this is a marketing ploy for opening weekend (probably) or whether this will always be the case but either way it’s definitely getting the word out about Dumb Starbucks.

I’m not really sure what to make of this – on the one hand it could be some really cool kind of anti-capitalist anti-corporation piss take of Starbucks that is trying to get people to stop going there and drink their coffee from an alternative source that would hopefully be ethical and fair trade and all that good shit, but on the other hand it looks like it’s just a marketing ploy to use familiar branding to get as many people as possible into these guys’ new coffee shop. It really does depend on whether it’s going to be giving out free coffee for the duration of its opening or whether this is just an opening weekend offer.

It even says in the FAQ that they look up to and respect Starbucks, which wouldn’t exactly be the words of an anti-corporate revolutionary, although this clause could have been inserted in as some kind of protection for when they get served by the actual Starbucks. Or it could just be the truth.

Interestingly, the two baristas who are staffing the place aren’t any wiser about the purpose/intentions of the shop either – unless they’re lying – as they were both hired anonymously via Craigslist and have never met the owners. The mystery deepens and really does seem to have everyone perplexed. Everyone is enjoying their free coffee though, so nobody – except the grouchy guys up in corporate at Starbucks – are complaining about it.

A Starbucks spokesman told the Wall Street Journal that they had nothing to do with Dumb Starbucks but were looking into it with immediate effect. It probably won’t be long until they’re faced with a monster lawsuit and forced to close shop, so if you’re in Los Feliz you might as well enjoy this while it lasts. Only in Los Angeles.

Something called Dumb Starbucks popped up in Los Feliz,;I don’t understand but there’s free coffee so I’m in line pic.twitter.com/UCdwEv0y1S

Enjoy our full menu of coffees and cold drinks pic.twitter.com/wPacrEEH9k

Dumb Starbucks store. Their legal FAQ is what impressed me. http://t.co/MkrdosOt7x pic.twitter.com/Zhb96WXJ6w