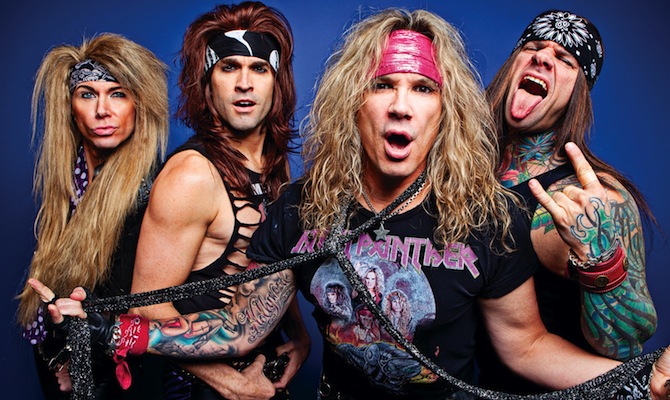 Steel Panther appear to be one of those complete piss take bands who have actually gone out there and smashed it. I mean, just look at them. LOOK AT THEM. What are they doing?

Steel Panther appear to be one of those complete piss take bands who have actually gone out there and smashed it. I mean, just look at them. LOOK AT THEM. What the fuck are they doing? Check pouty Mcpountingson on the left who’s wearing more make up than Christian from The Hotel. I mean, come on guys, take a good hard look at yourselves. But you know what, these guys must have done something right because they’re absolutely rolling in cash now. They’re selling out massive gigs, playing every festival under the sun and have just played the main stage at the official Playboy Mansion party, which as you can imagine featured a whole lot of titties. They’re doing that and I’m doing this. They win, hands down.

Even Steel Panther’s music is actually really sick in a completely jokes kind of way. I mean, these guys can shred guitars and scream out their voices to an exceptional standard, so why shouldn’t they have some kind of success? Just because they dress like a bunch of jokes straight out of Dad Rock 80’s doesn’t mean they can’t entertain. In fact, entertaining is what they do exceptionally well.

â˜› Watch Next: This May Well Be The Worst Live Album Ever Made… But That’s No Bad Thing

So it gave me great pleasure when I watched this video of Steel Panther performing at some show over in The Sunset Strip and when some random dude from the the audience got on stage and said he wanted to play one of the band’s guitars. The band obviously didn’t know what to expect and joked around with the kid for a bit before passing over one of their $250 guitars and told him that if he breaks it he pays for it. Low and behold, the kid was actually a total sickhead who shredded the fuck outta that guitar.

â˜› Check This Out Next: The NME’s Awards Bash Was About As Alternative As A Cabbage