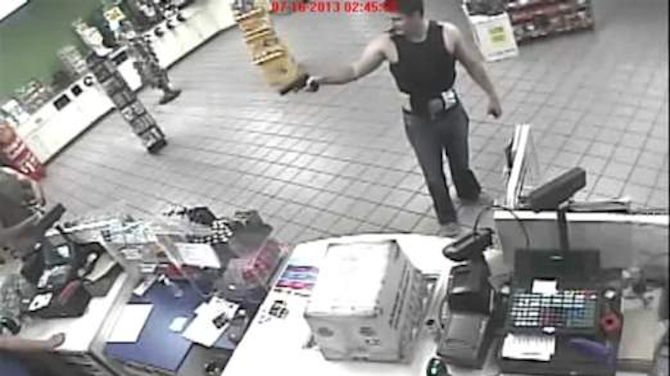 So many cops only become cops so they can have power over people that enables them to be assholes and get away with it. This video is the perfect example of this.

In America, there are two kinds of people that become cops – the kind of people that really do believe that they need to uphold the law and the kind of guys that were jocks at school who failed at professional sports and just become cops so they can keep picking on nerds and generally be assholes to everyone. Or maybe not jocks exactly but at least butthurt losers who only care about having authority over other people and abusing it. This video is the perfect example of this.

The cop – or former cop we should probably say as he was fired after this incident – is from Tuscon Arizona, which makes him a bonafide desert kid weirdo, and his name is Kyle McGartin. He’s 23 years old. For some reason, the other night he was rocking around town with one of his buddies wearing a black wife beater and being a general badass.

Eager to heighten that reputation, he decided to walk into a Giant Gas Station whilst he was wasted and stand in the middle of the store and pull a gun on an employee. It looks as though it was completely unprovoked and that he literally only did it to prove what a massive badass he was as he probably felt real powerful having the shop attendant’s life in his hands and trying to make him piss himself or something. It’s kinda like that scene in Fight Club with Raymond K. Hessel only without the good intentions behind it, instead it’s just Kyle McGartin on an asshole power trip.

Basically the dude is an idiot. It’s awesome that the cops tracked him down and fired him. Enjoy your life in the desert McGartin.