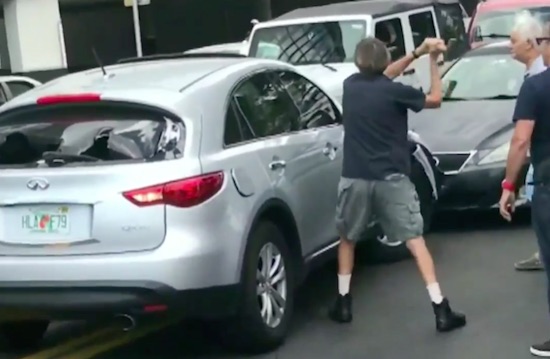 Whilst GTA is often regarded as one of the best video games of all time, it’s fair to say that it’s probably a little on the unrealistic side when it comes to actual action because there’s no way half of those car chases and vehicular homicides would happen on the reg in real life.

However, every now and then a video crops up which is so reminiscent of GTA gameplay that it’s almost uncanny. The video below comes from the streets of Miami, where apparently a guy who is high off his face on drugs has managed to cause a car pile up after crashing into three cars.

He desperately tries to manoeuvre so he can find his way out of the carnage that he’s caused whilst other drivers swarm his car trying to attack him or at least make him get out so he can step up and face the consequences of his actions. Wait for the best bit towards the end of the video, which I really didn’t think I would ever see anywhere but on GTA:

Miami man "high on narcotics" crashes into 3 cars, then flees while other drivers attack his SUV with sledgehammer because Miami: https://t.co/FqwMbjIVSi pic.twitter.com/SimfvNupOR

Yeah, that guy just casually breaks out a hammer and starts smashing the windows of the car like it’s no big deal and a perfectly normal thing to do. Guess everyone in Miami really is that crazy.

Would love to have known what happened next after he seemingly got away – just whack it in the chop shop for a quick repaint and good as new? Not sure how realistic an option that is in real life but after seeing this I suppose anything is possible.

For more of the same, check out this real life GTA gameplay from a petrol station. Looks lethal.