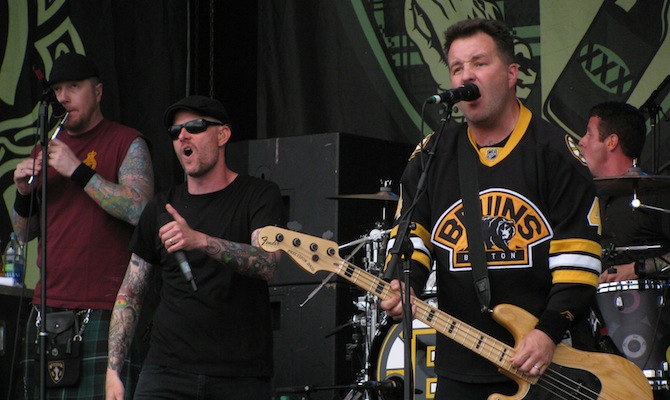 While the Dropkick Murphys were celebrating St Patrick’s Day some skin-head Nazi jumped on the stage and started giving Hitler salutes. Next thing you know and one of the band’s carving his face in with his bass guitar.

Bass in the face, Ireland! If you’ve got any punk rock friends, you’ve probably seen via your Facebook timeline that Ken Casey from Dropkick Murphys was involved in an onstage fracas on St. Patrick’s Day. Basically what happened is that they were playing one of their shit songs, there was a stage invasion, they started playing a good AC/DC song, and then one of the dudes who was invading the stage started doing a Nazi salute in time with the music. Ken dropped his Guinness and ran over and beat the fuck out of him and then told the crowd (who could barely understand his tick* Irish accent) that Nazis weren’t welcome at their gigs.

For the record, I think it’s great that he smashed up a Nazi on stage. I can sympathise with his plight. I play in a band, and I punched one of my friends in the face when he ruined my guitar solo during a gig. I find it difficult enough to play the stupid thing without some retard holding the strings as well. Anyway, who the fuck are Dropkick Murphys? They’re basically a bunch of American guys who desperately want to be Irish and have made a career out of pretending they are. They describe themselves as ‘Celtic Punk’ which is basically shit three chord songs with accordions, bagpipes and tin** whistles, that go on about how they miss the wild streets of Kilkenny and how that McDonalds don’t put real potatoes in their fries. They’re the musical equivalent of all the English cunts, who every March 17th pop down their local, don a stupid green and black hat, tell anyone who can be fucked to listen that their Great-Grandmother was conceived in Tipperary and how much they love the craic. Basically every day is St.Patrick’s Day for DKM, so the actual St.Patrick’s Day must be like fucking Christmas to them. “Ahhh derrr mate, wotcha got meee? Anuva pint of Guinesss? Ahh bejasus, I luv da black stuff!” And so on.

Do I agree with the excessive violence that Ken demonstrated? Of course I do. I’d do exactly the same if someone from TV Licensing came on stage when I was playing, demanding I get a TV license when I don’t have a working TV. I’d happily stick my guitar into their anus, pull it out of their mouth and carry on playing. The TV Licensing people are a modern day Nazi Party, with the cunts in their secret TV spying vans being the Gestapo. Y’know when a person goes missing and their body is never found? That’s coz TV Licensing has gone and fucking killed them for not having a permit: even though they probably didn’t need one. Every £1000 fine they recoup, they use to silence people and get away with it. That’s how Jill Dando died on her doorstep. Oh, she had a TV license alright, but she’d cottoned on to their murderous ways and was about to expose them on Crimewatch to the nation. Do you know anyone that works for TV Licensing? Fuck no. They’re all Freemasons and secret underground Nazis that survive on a diet of aborted foetuses. Noel Edmond’s first job was in TV Licensing and George Osborne still works for them part-time.

Last but not least: Ahh bejasus, to be sure to be sure, and ooh ahh Paul McGrath.

*Irish for ‘thick.’
**Irish for ‘tin,’ as in the metal and not the opposite of fat. Although it’s hardly a clarinet or Ron Jeremy’s penis.