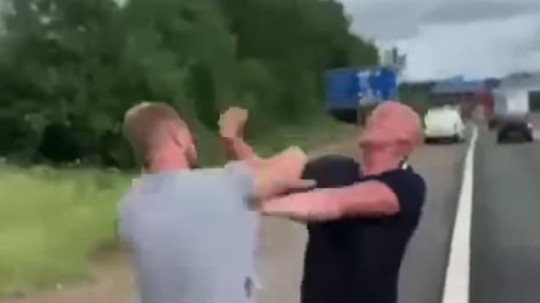 They’re inches away from traffic.

It’s always great to end the week with a cool fight and this one is no exception as a couple of drivers have been filmed brawling on the side of the M20 and almost falling into the oncoming traffic speeding past them.

It’s a really weird because it almost looks like the two men in the video have deliberately picked that spot to have a scrap, almost like they’re in a bare knuckle boxing league or something. It’s made even weirder by the fact some random guy – who nobody in the video seems to know – runs over and then says he wants to ‘adjudicate’ proceedings.

There’s a lot of strange energy on this one:

What is that all about hey? Someone commented on the original footage on Facebook and said that it was thought to be about a business dispute, but it’s still such a strange, strange location for these two to catch up with each other and decide to slug it out, isn’t it? Only in Maidstone I guess.

For more of the same, check out a bunch of people gathering to watch a massive fight in a pub courtyard. Massive.