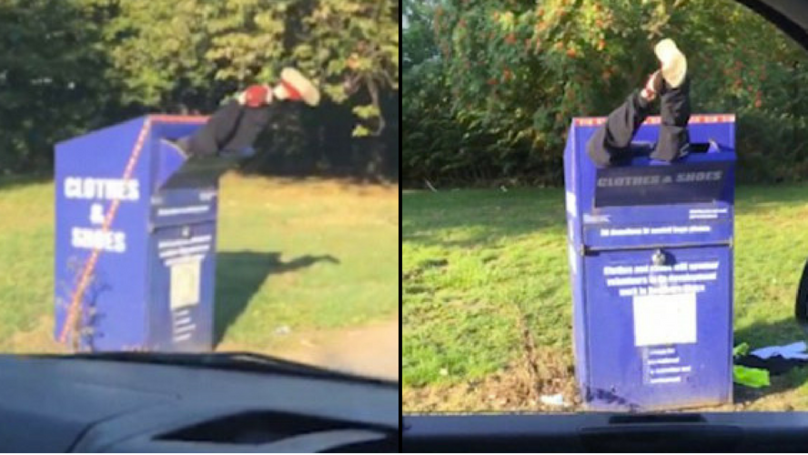 I’m fairly certain that all of us have run into some bizarre scenes early in the morning at some point in our lives, but this video from Rotherham has to be up there with some of the weirdest stories out there.

It comes courtesy of a guy called Ashley Kerr who was delivering sandwiches around Mexborough in Rotherham on Friday morning. He’s driving along when he spotted a guy who was stuck head first in a clothing recycling bin and he went over to investigate – here’s what he said happened:

As I was driving down the road I thought I saw a pair of legs hanging out of the clothes bin. I wasn’t sure but as I got closer I realised I was right.

I asked him if we was alright. His reply was ‘Am sound me pal’ and then I said ‘You sure?’ he replied ‘Yeah’.

I’m not sure if he got out, but I’m guessing he did.

Weird – sounds like the guy was a bit of an expert at getting stuck in recycling bins or something? Locals think that it was probably the legendary ‘dancing man’ who apparently spends his time in the area dancing strangely and often gets himself stuck in the recycling bin for kicks. Sounds like a charmed existence.

For more of the same, check out this weird story about a guy getting stuck in an ATM machine. Different.