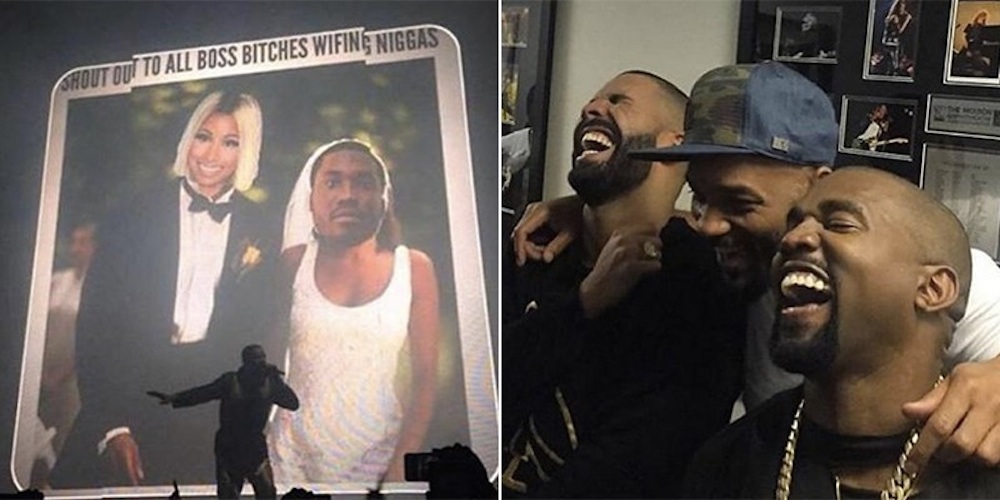 This could be the final nail in the coffin of Meek Mill’s career.

The Drake and Meek Mill beef has been growing all week, ever since Meek accused Drake of not writing his own raps. Drake’s respond was to fire out a couple of diss tracks and Meek’s response was apparently so lame that it caused Nicki Minaj to dump him, although not hasn’t yet been 100% confirmed. It wouldn’t be that surprising though because he is getting absolutely rinsed and the icing on the cake came last night at OVO festival in Drake’s home town of Toronto.

Drake performed the two diss tracks to a backdrop of memes absolutely destroying Meek Mill. You can watch couple of clips from his performance below and it looks like there were A LOT of Meek disses throughout. You can bet that he’ll probably release the video onto the internet fairly soon though because it’s just more ammo to pump into Meek Mill’s dead body.

The absolute piece de resistance emerged though when Drake was filmed backstage after his performance with Kanye West and Will Smith. What do you think they were all doing? Looking at Meek Mill memes on Will Smith’s phone and laughing their asses off at them of course. There isn’t much you can do to come back to that, and after Meek Mill’s last diss got so badly ripped, I doubt he’s even gonna try.

In fact, his response to all this going down was to post a picture of him getting his teeth whitened, which you can also see below. Obviously, he’s been pretty much unanimously rinsed for that too.