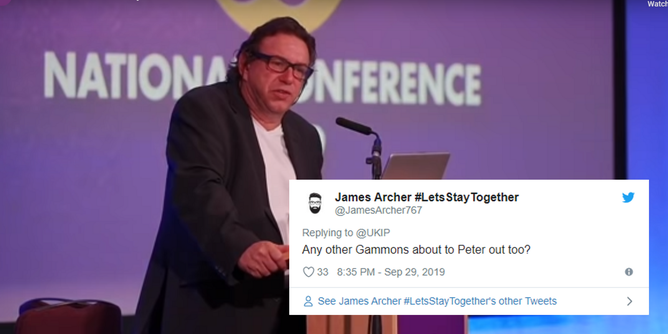 For the uninitiated, the term ‘gammon’ is an insult used to describe ‘white, middle-aged, furious-faced men’ (h/t Urban Dictionary) who get red in the face whenever Brexit and/or immigration come up as a topic.

A bit dumb, counter-productive and immature? Sure, but it’s also a pretty amusing diss phonetically and because, let’s be real, some of the people it describes genuinely do look like gammon.

Anyway, when UKIP posted about “a very intelligent and articulate man” who had just joined their party, people could hardly believe it when his name was revealed as… DR PETER GAMMONS.

Dr Peter Gammons on why he left the BXP for UKIP.https://t.co/E5zm4C5xfL

Cue the trolls, comments and memes:

Ukip has to be trolling us at this point

Fair: Normal names.
Not Fair: when UKIP actually trolls itself with names like that. pic.twitter.com/AZuaFLpjLj

Kind of writes itself, now.

When is Ray Cist joining the party?

A man called ‘Gammon’ leaving the BP for UKIP. What delicious irony. He even looks like a big, pink pig. But the ‘applause’ in the hall sounds a bit thin though. No wonder the video doesn’t feature reaction shots.

You couldn’t make it up. I mean this is the sort of thing the internet was made for, and no one even had to make it up as a bit of satire – it literally happened in real life. What a world.

For our rundown of the best/worst of Nigel Farage’s political career in pictures and videos, click HERE.