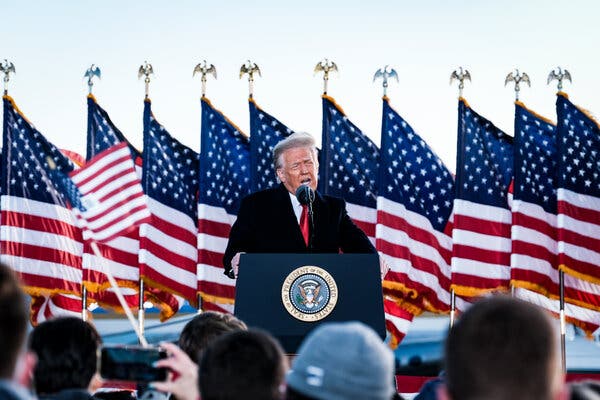 Today’s the day that Donald Trump steps down from the Presidency and hopefully Joe Biden can attempt to heal America and turn it around from the shitshow that it’s been for the last four years, but Trump had one last speech before he exited The White House for the final time.

Trump was speaking at Joint Base Andrews in Maryland on Wednesday when he said the following, before shuffling over to Air Force One with Melania, his children, in laws and grandchildren to ‘YMCA’ by The Village People. Not sure where he was going as he said that he was refusing to attend Biden’s inauguration – I could see him just flying around the world a couple of times on Air Force One with his family to skip out on all the celebrations and pretend that they’re not actually happening.

Anyway, here’s the clip and some of the text underneath that as well:

It’s been an incredible four years.

We have worked hard. As the athletes would say, we have left it all in the field.

We’ve accomplished so much together.

People have no idea how hard this family worked — and they worked for you.

They could’ve had a much easier life.

As bad as the pandemic was … we did something that is really considered a medical miracle.

They’re calling it a miracle, and that was the vaccine. We got the vaccine developed in nine months.

I will always fight for you.

I will be listening and I will tell you the future of the country has never been better.

We will be back in some form.

Have a good life — we will see you soon.

Well at least he was consistent with the rest of his Presidency in his final speech  i.e. bigging himself up with no real evidence, but I suppose we shouldn’t really be that surprised with that. It’s anyone’s guess where he’ll end up next –  and whether or not he’ll have a platform to spout this nonsense anymore following that last little shuffle to the YMCA.

For more of the same, check out Melania counting the minutes until she can divorce Donald Trump. Time’s almost up now.